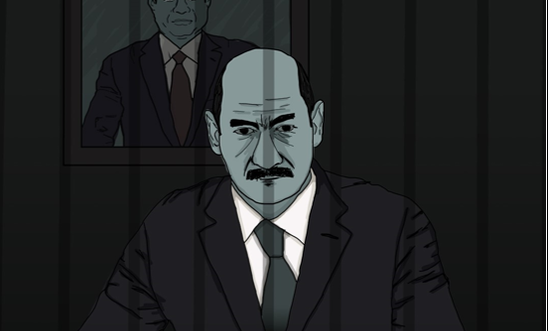 ‘The rights to liberty and fair trial, as well as freedom from torture, are suspended for anyone accused of “terrorism”’ - Philip Luther

Amnesty’s 60-page report - Permanent State of Exception, documenting 138 cases of people detained by the Supreme State Security Prosecution body in the past six years - shows how this much-feared branch of Egypt’s prosecutorial authorities has been complicit in enforced disappearances, arbitrary detention and torture.

Under Sisi’s presidency, the prosecution body, which is responsible for investigating national security threats and has special powers under Egyptian law, has detained thousands of people for prolonged periods on spurious grounds. Since 2013, the number of cases brought by the body has increased nearly threefold - from 529 in 2013 to 1,739 last year.

For example, an Al Jazeera journalist, Mahmoud Hussein, who is accused of broadcasting false news, has been detained since 23 December 2016. His detention was repeatedly renewed until his release on probation was ordered in May. However, the Supreme State Security Prosecution effectively overrode this decision and ordered Hussein’s further detention on new accusations.

Amnesty’s report shows how the prosecution body routinely abuses its powers, which already allow it to order pre-trial detention of suspects for up to 150 days. Beyond that, detentions can be extended by referral to a “terrorism circuit court”, meaning they can stretch into years. Amnesty found that detainees were kept in pre-trial detention for an average of 345 days - and in one case for 1,263 days - before being released without being referred to trial. During that time, detainees were rarely questioned more than once.

The steep rise in such “security” prosecutions has enabled the authorities to detain large numbers of people without evidence, based on secret police investigations and without recourse to an effective remedy. This has effectively replicated the long-term administrative detention practices which were a hallmark of Mubarak-era Egypt.

The Egyptian authorities recently responded to a rare outbreak of nationwide protests with a wave of arrests, detaining more than 4,000 people, many at random. The Supreme State Security Prosecution has been investigating most of these cases, many in connection with “terrorism”-related accusations.

“The Supreme State Security Prosecution has become a central tool of repression whose primary goal appears to be arbitrarily detaining and intimidating critics, all in the name of counter-terrorism.

“In Egypt today, the Supreme State Security Prosecution has stretched the definition of ‘terrorism’ to encompass peaceful protests, social media posts and legitimate political activities, resulting in peaceful government critics being treated as enemies of the state.

“It is outrageous that an institution intended to bring legal proceedings to deliver justice is so blatantly flouting its responsibilities to guarantee fair trial rights and is instead complicit in the torture and enforced disappearance of detainees.

“The normalisation of the Supreme State Security Prosecution’s role points to a permanent state of exception, where the rights to liberty and fair trial, as well as freedom from torture, are suspended for anyone accused of ‘terrorism’.

“The Egyptian authorities must open a public commission of inquiry into the role of the Supreme State Security Prosecution in prolonged arbitrary detention, violations of fair trial rights, and complicity in police abuses.”

Of the 138 cases documented by Amnesty, 56 individuals were detained for participating in protests or for statements made on social media, 76 were held in connection with their political or human rights activities, and six were accused of involvement in violence. Most were investigated on accusations of membership of - or aiding - a terrorist or other illegal group with the aim of harming public order or security. In practice, many were detained solely on the basis of secret police investigations.

Dozens of these were human rights defenders and peaceful critics of the government, including Zyad el-Elaimy, a human rights lawyer and member of the Egyptian Social Democratic Party. He was arrested for attempting to co-found a parliamentary coalition to run in next year’s parliamentary elections. Meanwhile, Abeer el-Safty, a journalist, was detained following her refusal to be coerced by the police into voting in a recent referendum.

Amnesty’s report also shows how the Supreme State Security Prosecution systematically neglects to investigate allegations of enforced disappearances and torture, and even allows confessions extracted through abuse to be used as evidence in trials. In some cases, defendants were subsequently sentenced to death and executed on the basis of this “evidence”.

In one case, the human rights lawyer Hoda Abdelmoniem was subject to enforced disappearance for three months - during which time she appeared in front of Supreme State Security Prosecution officials informing them that police were detaining her in an undisclosed location without access to her lawyer or family. Prosecutors took no action to investigate, nor did they order her to be transferred to a regular place of detention, until after 90 days of enforced disappearance.

Overall, the Supreme State Security Prosecution failed to investigate 46 cases of torture or other ill-treatment documented in Amnesty’s report. Human rights activist Esraa Abdelfattah told the prosecution body that officers from the National Security Agency special police force had abducted, beaten and tortured her, including by attempting to strangle her. However, prosecutors failed to open an investigation into these disturbing allegations.