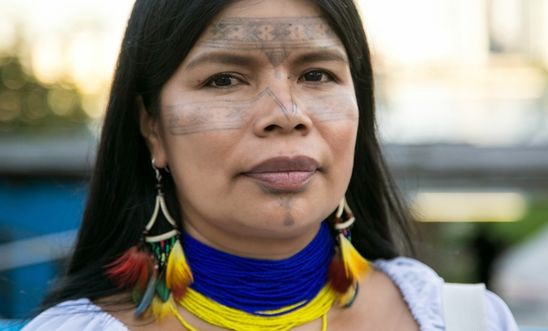 Ecuador’s government must ensure appropriate and effective investigations are carried out into the attacks and threats against members of the Mujeres Amazónicas (Amazonian Women) collective, Amnesty International said today.

One year after the publication of the report They will not stop us - which exposed the flaws in the response of the Attorney General's Office to a series of attacks and death threats against Patricia Gualinga, Nema Grefa, Salomé Aranda and Margoth Escobar - justice is yet to be served.

Amnesty visited the country last week to speak to human rights defenders and hand a petition to the government demanding that more be done to protect activists in the country.

“We want justice, we want our rights respected. We are women of peace, but we are also like a beehive: what affects one of us affects us all. We will be here as long as there are violations of human rights and of our territory.”

Amnesty and members of Mujeres Amazónicas handed over a petition containing more than 250,000 signatures from 168 countries to the Director for Human Rights of the Attorney General’s Office, Daniel Eduardo Vejar Sánchez.

The petition called on him to:

Amnesty told the Attorney General's Office that the lines of investigation and protection measures that the authorities have offered to victims continue to ignore possible motives for the attacks linked to the work of human rights defenders which could pose a challenge to large-scale economic interests.

Furthermore, the investigations lack a gender perspective which recognises how their role as women indigenous leaders and human rights defenders could be viewed negatively because it defies the gender stereotypes imposed on women.

The Attorney General's Office stated that it is working on internal guidelines for investigating cases where the victim is a human rights defender and provided detailed information on each of the investigations where there has been a lack of progress. Amnesty is calling on the Ecuadorian government to ensure that driving investigations forward and carrying out procedures is a state obligation and must not fall to the victims.