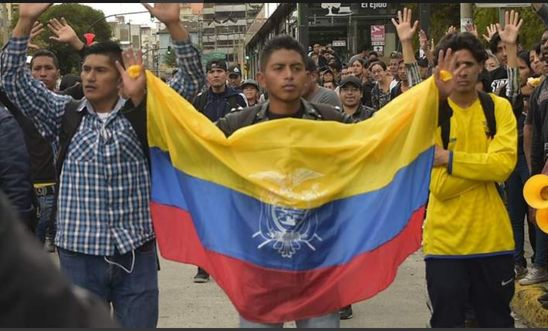 In response to the Ecuadorian authorities’ heavy-handed repression of demonstrations across the country, Erika Guevara-Rosas, Amnesty International’s Americas director, said:

“The Ecuadorian authorities must put an immediate end to the heavy-handed repression of demonstrations, including mass detentions.

“They must conduct swift, independent and impartial investigations into all allegations of arbitrary arrests, excessive use of force, and torture of those who have been detained in the context of the protests.

“The state of emergency cannot be an excuse to violently repress people’s discontent over economic measures that may put their rights at risk.”

The ongoing protests began in multiple cities last Thursday (3 October) in response to President Lenín Moreno announcing austerity measures. Hours later, the president declared a state of emergency across the nation, authorising the mobilisation of the armed forces and the national police to maintain order and prevent violence.

The Ombudsman of Ecuador has documented security forces violently repressing protesters and journalists, and forcing their way into private properties. In some cases, they have used tear gas and pellet guns indiscriminately against crowds.

The Ombudsman found that the authorities detained 485 people, including children, in relation to the protests on 3 and 4 October alone. In some cases, authorities have allegedly detained people without informing them of their rights or the reason for their arrest, and physically and verbally mistreated them.

On Monday (7 October), Ecuador’s Constitutional Court ruled that the present state of emergency is constitutional but limited its scope to 30 days, despite challenges by several human rights organisations. The court also ordered the national police and armed forces to fulfill their duties to protect the integrity and rights of journalists, humanitarian organisations and the general public.

While there have also been allegations of violence by protesters, the authorities must take appropriate measures to address such episodes of violence while ensuring that those who are protesting peacefully can continue to do so.