Eastern Ukraine: Civilians 'paying with their lives' as fighting escalates 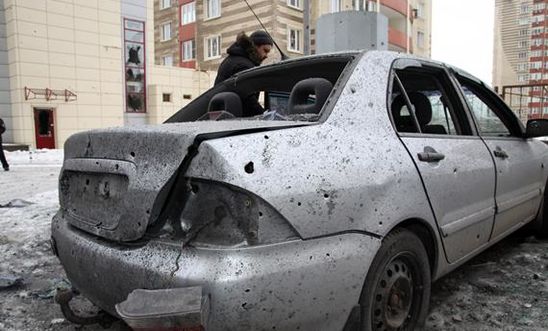 A man stands next to his car destroyed after shelling between Ukrainian army and pro-Russian separatists, January 2015 © SERGEI GAPON/AFP/Getty Images

An escalation in hostilities in eastern Ukraine since yesterday has resulted in the deaths of civilians, including children, with many more lives in grave danger Amnesty International said, as it renewed its calls on both sides to protect civilians amid the fighting.

Yesterday Ukrainian armed forces received orders to mount a heavy assault on pro-Russian separatist positions in eastern Ukraine in a push to retake full control of the contested Donetsk airport and surrounding areas. This followed an earlier ultimatum issued against them by pro-Russian forces to leave the airport and a subsequent full-scale offensive against Ukrainian forces’ positions there.

“The use of heavily-populated areas for launching attacks by pro-Russian separatists in Donetsk and Horlivka and the return of fire into these areas by pro-Kiev forces is putting civilian lives in great danger.

“Pro-Russian separatist forces must stop using densely-populated areas for launching military operations and Kiev-controlled forces must not launch indiscriminate attacks which put civilian lives at risk. These are violations of the laws of war for which civilians are paying with their lives.”

Residents in pro-Russian separatist controlled Horlivka, 25 miles north-east of Donetsk, told Amnesty of similar cases of rockets being fired from the town centre. Shortly after one such instance yesterday, artillery fire was returned by pro-Kiev forces, killing at least two civilians.

According to a high-ranking local official in a separate instance two brothers, aged seven and 16, were killed yesterday after their house was hit directly in Vuhlehirsk, a town some  40 miles north-east of Donetsk which is controlled by pro-Kiev forces. A girl, aged eight, was wounded in the same attack and her leg was later amputated in hospital.

Three people, including a father and his teenage son, also died this morning in Ukrainian-controlled Debaltseve, a key rail hub, after shelling by pro-Russian separatist forces.

The escalation in fighting follows an artillery strike on a bus last week, which killed 12 civilians and wounded 16 near Volnovakha.

The use of populated areas for staging military operations and the use of imprecise explosive weapons in civilian neighbourhoods repeats a pattern Amnesty has observed during several research missions to eastern Ukraine last year.

Amnesty is reiterating its call that all incidents involving civilian deaths should be urgently investigated as they could amount to violations of international humanitarian law. International humanitarian law prohibits attacks that target civilians and civilian structures, as well as attacks in civilian areas that cannot be directed at a specific military objective. Both sides in the conflict have violated the prohibition by relying on unguided mortars and rockets that cannot be aimed with any precision in highly-populated civilian areas.

By basing troops, weaponry and other military targets in residential areas, separatists and Ukrainian government forces have failed to take all feasible precautions to protect civilians, endangering civilians in violation of the laws of war.

A nominal ceasefire was agreed in eastern Ukraine in September 2014, but upwards of 1,400 people, including many civilians, have been killed since then as both sides increasingly engage in tit-for-tat reprisals. In all, almost 5,000 people have died since the conflict broke out last year.