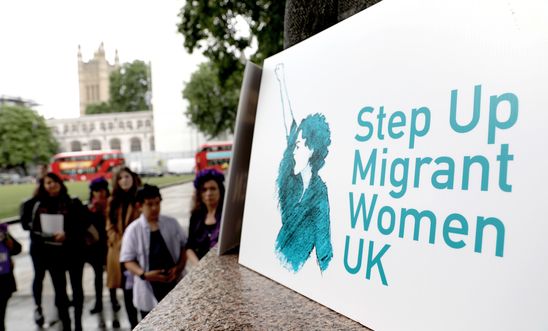 Campaigners have welcomed the government’s reintroduction of the Domestic Abuse Bill to Parliament but warn it will fail to be a truly ground-breaking piece of legislation unless it provides proper safety and protection for migrant and BME women.

The Step Up Migrant Women coalition - a coalition of more than 40 BME  specialist frontline services, migrant and human rights organisations - is concerned that the Bill falls short on its commitment to support all survivors to safely escape domestic abuse.

Currently, the Bill does nothing to ensure migrant women who have experienced domestic abuse will have their safety put first. Women with insecure immigration status are often blocked from seeking help from the police for fear they will be reported to the Home Office and detained, deported or made destitute. Additionally, migrant women are predominately barred from refuges and denied a safe place to sleep because they cannot access public funds. The Bill must set out clear measures to ensure the safety of all domestic abuse survivors, no matter where they are from, the Step Up Migrant Women Coalition has said.

“Whilst we welcome the reintroduction of the Domestic Abuse Bill and the expansion of some of its provisions, by neglecting to address the barriers experienced by migrant victims, the Bill falls short of realising the government’s stated goals of protecting victims and tackling crime. All victims, regardless of their immigration status, must be able to report to the police safely and without fear, otherwise they cannot be protected, and their abusers will not be held accountable.

“We are disappointed that migrant survivors are once again overlooked in this Bill in spite of the recommendations made last year by the Parliamentary Joint Committee on the draft Domestic Abuse Bill to establish a firewall to separate reporting of a crime and access to support from immigration control. Vague promises to review support for migrant victims at a later date reinforces the notion that migrant survivors are undeserving of state protection and support on equal footing as other victims of abuse.  The Domestic Abuse Bill cannot be truly ground-breaking until there is a certainty that all women will be protected, and all perpetrators held accountable.”

“The Domestic Abuse Bill must provide meaningful support for migrant women with insecure immigration status within its parameters. Without access to safety, protection and justice, women with no recourse to public funds are at serious risk of further abuse.”

“The failure to include proper and meaningful protection for BME and migrant women in the Bill represents a huge setback for the government’s attempts to show that it cares about all victims of abuse and violent crimes. We are aware that an internal review on the issue of the ‘No Recourse to Public Funds’ condition is currently being undertaken but we have had no information about this and worry that proposals will fall far short of the government’s commitments under the Istanbul Convention, including the need to protect all women without discrimination, irrespective of their migrant status. We call on the government to make the review process more transparent, to make public its terms of reference and to provide a long-term sustainable solution that enables abused migrant women and their children to report their abuse and live in security and dignity.”

“Women with insecure immigration status are more vulnerable to abuse and yet they are unable to report violence and seek justice without fear because there is currently no separation of immigration enforcement from police response to victims of crime. Many of the women we work with at Women for Refugee Women are afraid of reporting abuse because this can result in being detained or deported. This Domestic Abuse Bill should ensure all women, including migrant women, are able to report safely and protected when they report abuse and not penalised because of their immigration status.”

"IKWRO are proud to be members of the Step Up for Migrant Women campaign. No woman or girl at risk of violence should ever be discriminated against on the basis of her nationality or immigration status. The right to live free from harm, to be safeguarded and to access support must be universal."

“All women who step foot on British soil - regardless of where she is originally from - belongs to and should be the responsibility of the UK government. If a migrant woman’s paperwork is not the same as mine, it is not her fault, and denying her the right to exist in this country does the same amount of damage as the government in her home country. She should have the same rights as all UK women, and we at MEWSo think it is wrong that she is still being tied to a country that she has forsaken or has forsaken her.”

“By bringing this Bill back to parliament, the Government is sending a clear message that it wants to take the lead and eradicate this horrendous form of abuse. Yet promises to provide safety and protection for all women that experience this crime will not be met unless specific measures are taken to support migrant and BME survivors. These women are currently falling through the gaps – unable to seek refuge beds and police support like everyone else.

“If the government really wants to keep victims safe, they must treat all victims as victims - no matter what their immigration status.”

“We welcome the return of the Domestic Abuse Bill to parliament, but it remains unacceptable that migrant women are completely absent from this legislation. The Bill does nothing to change the serious barriers to safety women with no recourse to public funds face due to their immigration status. Their experiences in trying to escape are truly shocking.

“The reforms called for by the Step Up Migrant Women Campaign are urgently needed, to ensure migrant women can safely report domestic abuse without fear of immigration enforcement, and can access life-saving refuge services and other forms of protection and support."

“We are pleased that the Domestic Abuse Bill is finally back in Parliament and we welcome more tools to support and protect victims of serious and harmful abuse, however the Bill still falls short of ensuring that all victims of abuse can access protection and support equally. The barriers to reporting abuse to the police faced by migrant women and a lack of access to services for BME women and their children remain unaddressed.

“The Bill will not succeed without appropriate funding and we need to see sufficient resources for the lifesaving specialist services women rely on. Women should not have to face a choice of destitution and homelessness or remaining with an abusive partner, and the new law must clearly address this situation, for all victims including migrant women.”

The Bill must offer full protection for migrant women