Colombia: decriminalisation of abortion a 'historic victory' for human rights 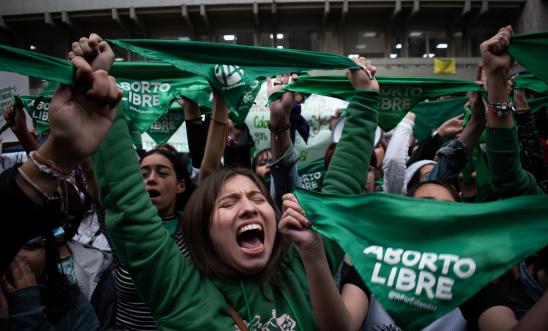 The Colombian Constitutional Court's ruling in favour of the decriminalisation of abortion during the first 24 weeks of a pregnancy is a great triumph for human rights, said Amnesty International today.

“We celebrate this ruling as a historic victory for the women's movement in Colombia that has fought for decades for the recognition of their rights.

“Women, girls and people able to bear children are the only ones who should make decisions about their bodies. Now, instead of punishing them, the Colombian authorities will have to recognise their autonomy over their bodies and their life plans.

“Following the legalisation of abortion in Argentina last year and the recent decriminalisation in Mexico, this ruling is yet another example of the unstoppable momentum of the green tide in Latin America.

“We will not stop fighting until the sexual and reproductive rights of all women, girls and people able to bear children are recognised in the entire continent, without exception.”

The Constitutional Court approved the ruling to decriminalise abortion today during the first 24 weeks of pregnancy, with five votes in favour and four against.

After 24 weeks, legal abortion will continue to be permitted only in cases of a risk to the life or health of the pregnant person; the existence of life-threatening fetal malformations; or when the pregnancy is the result of rape, incest or non-consensual artificial insemination.

"Although decriminalising abortion in the first 24 weeks is a vital step forward for abortion rights in Colombia and Latin America and the Caribbean, no one should ever be criminalised for accessing an abortion. It’s vital that we keep pushing for full access to safe and legal abortion in all circumstances in Colombia and beyond.”