China: UN inaction over atrocities against Muslims in Xinjiang condemned 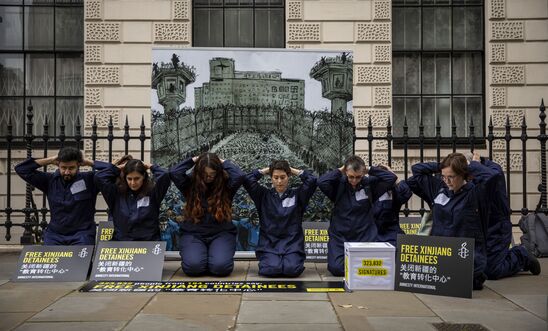 The international community must strongly condemn the ongoing serious human rights violations in China’s Xinjiang and pave the way for justice and accountability, Amnesty International said today in an open letter to UN member states.

The call comes after 323,832 people from 184 countries signed the organisation’s petition calling on the Chinese authorities to release the hundreds of thousands of Muslim men and women currently being subjected to mass internment, torture and persecution in Xinjiang.

The Chinese government has shown a total unwillingness to acknowledge the reality of the situation in Xinjiang.  Meanwhile, UN bodies and member states have been slow to respond to the violations. The latest UN Human Rights Council session ended last week without any formal action being taken to address abuses in Xinjiang.

Amnesty is calling on UN member states to stand together to strongly condemn China’s serious human rights violations in Xinjiang and to launch a robust, independent, international investigative mechanism to ensure accountability.

“Around the world, hundreds of thousands of people have signed our petition to express their outrage at evidence of crimes against humanity and other serious human rights violations being inflicted on Muslims in Xinjiang.

“Despite mounting evidence of serious human rights violations and crimes under international law over the past four years, the United Nations and its member states have failed to live up to their responsibility to hold China to account for its actions.

“The international community must stop pretending that the dystopian reality for Muslims in Xinjiang will somehow remedy itself. Too much time has already been wasted. Now more than ever, UN member states have a duty to protect the human rights of all people in Xinjiang, launch an investigation into the suspected crimes under international law, and ensure accountability.”

Last week Amnesty activists gathered at the Chinese embassy in London to hand in a petition signed by more than 26,000 people across the UK. The activists were dressed in the distinctive blue uniforms that camp detainees are forced to wear and mimicked the pose of Uighur detainees seen on a railway platform on their way to the camps with their hands clasped behind their heads. Similar events took place in Chinese embassies in: Dakar, Senegal; Helsinki, Finland; Lima, Peru; Lisbon, Portugal; Madrid, Spain; Paris, France; The Hague, the Netherlands; and Washington DC.

The global petition is part of an ongoing global Amnesty campaign. The campaign highlights more than 60 cases of individuals arbitrarily detained in “transformation-through-education” centres – actually, internment camps – or sentenced to prison for years. These represent only a small fraction of the up to one million or more people who the Chinese authorities have detained under the guise of fighting “terrorism”.

Memeteli’s sister, Hayrigul Niyaz, was detained after she returned from studying abroad, and he has no information about her whereabouts in Xinjiang. Memeteli told Amnesty: “If I met her again, I will say: 'Sorry, my sister, that I couldn't save you from the camps.’”

Adila’s father, Sadir Ali, was arrested in 2018 and sentenced to 20 years in prison, allegedly because he was fasting during Ramadan. Adila said: “Deep [in my] heart I will never be happy because my father is in the jail or in the camp. Why is the Chinese government doing this to us?” She said she had been unable to visit her hometown for 11 years and has lost contact with her relatives in Xinjiang.

Abduweli Ayup, a well-known Uyghur activist now living in Norway, told Amnesty about his sister, Sajidugul Ayup and brother Erkin Ayup, who are serving 12 and 14-year prison sentences, respectively, in Xinjiang for “inciting terrorism”: “I feel every time I do something, it will be dangerous for my family. No one can protect my family members from the punishment. I know that maybe my words will make the Chinese government very angry, but at least I will make the Chinese government know that I will not just watch them torture my sister. I’m not afraid to speak out anymore.”