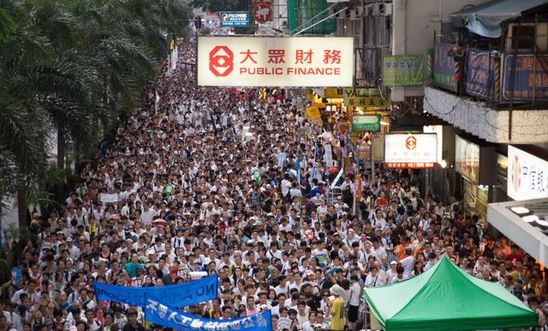 The Chinese authorities must immediately and unconditionally release all those detained for peacefully showing support for pro-democracy protests in Hong Kong, Amnesty International said today.

At least 20 people have been detained by police in several cities in mainland China over the past two days for posting pictures online with messages of support for the protesters, shaving their heads in solidarity, or for planning to travel to Hong Kong to participate in the protests.

Police are known to have detained people in Beijing, Jiangsu, and the southern cities of Guangzhou and Shenzhen, which are close to Hong Kong.

A further 60 have been called in for questioning by the authorities, known as being 'invited for tea'.

Chinese state censors have attempted to block any mentions online of the pro-democracy protests. The popular photo-sharing platform Instagram was banned in mainland China on Tuesday.

"The rounding up of activists in mainland China only underlines why so many people in Hong Kong fear the growing control Beijing has in their city's affairs.

"The fundamental freedoms being exercised by hundreds of thousands of people in Hong Kong continue to be denied to those in mainland China.

"The Chinese authorities must immediately release all those being detained for peacefully expressing their support for protesters in Hong Kong.”

The unnecessary use of tear gas and pepper spray by police at the weekend against an essentially peaceful protest only brought more people out on to the streets. Amnesty is calling on the UK government to suspend the export of tear gas to Hong Kong.

“There’s absolutely no way the UK should be exporting tear gas to Hong Kong at the moment. All licences should be immediately suspended.

“UK law categorically forbids the export of this type of policing equipment to places where human rights violations are likely.

“The UK has sold thousands of pounds worth of tear gas to Hong Kong this year and gas canisters clearly marked ‘Made in the UK’ have been recovered from the streets there– that’s a grim association to have with these protests.

“The UK should be doing all it can to persuade Hong Kong to respect the right to peaceful protest, rather than selling them tear gas.”

Police have in the last few days taken a less confrontational approach to the demonstrations, but there is much uncertainty about what will happen next.  Amnesty experts in Hong Kong continue to monitor the authorities' response to protests around the clock.

Amnesty International is aware the following individuals have been detained by the police in mainland China for expressing support for protesters in Hong Kong: