China crackdown on lawyers: 200 rounded up in past week, some face 15 years in jail 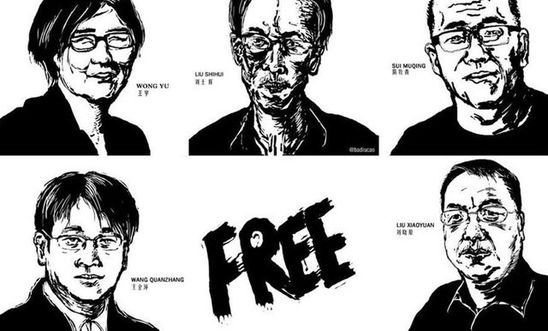 Some of the detained human rights lawyers including Sui Muqing

“The scale and severity of this crackdown is unprecedented.” – William Nee

Lawyers Xie Yang, Sui Muqing, and activist Gou Hongguo are being held on suspicion of “inciting subversion of state power”, which could carry a prison sentence of up to 15 years.

Nearly 200 individuals have been questioned or detained by police in the nationwide crackdown over the past week.

31 lawyers and activists are still detained or missing since the crackdown began last Thursday, and there are fears that they are likely to face similar state security charges.

The crackdown has been accompanied by a smear campaign in state media, with lawyers and activists accused of being part of a criminal operation to “undermine social stability”. The People’s Daily, the Communist Party’s newspaper, has claimed that in order to build a society that uses the law to resolve problems, the police need to “strike hard against illegal lawyers according to the law”.

“The use of state security charges is chilling, and only underlines the ferocity of the attack against rights lawyers.

“The scale and severity of this crackdown is unprecedented. The authorities appear intent on destroying the growing network of human rights lawyers and activists, and on spreading fear among those willing to stand up for human rights.

“The authorities are demonstrating their contempt for the rule of law and using every tactic possible to try and build a case against the Fenguri Law Firm.

“These lawyers are being punished only for their defence of human rights. Presumption of innocence has been thrown out the window.

“The police must disclose the whereabouts of all those detained, and grant prompt and effective access to their lawyers and families.”

The whereabouts of Xie Yang, Sui Muqing, and Gou Hongguo remain unknown, after the authorities announced they had been placed under “residential surveillance”. Under the controversial practice, the police could hold the men in unknown locations for up to six months without access to their lawyers and family members. All three men are at grave risk of torture and other ill-treatment.

Sui Muqing’s wife refused to follow a police demand to write a letter to her husband telling him to admit to his “crimes”.

The Beijing-based Fengrui Law Firm has been singled out as being at the centre of a “criminal gang”. The law firm has defended individuals in high-profile human rights cases, including prominent Uighur academic Ilham Tohti, who is currently serving a life prison sentence, and the victims of the 2008 tainted milk powder scandal.

The detention of one of the Fenguri lawyers, Wang Yu, last Thursday marked the beginning of this crackdown. Seven of the firm’s staff are detained or missing. Wang Yu’s husband, Bao Longjun, is also detained, and her 16-year-old son had his passport confiscated.

Many of the activists and lawyers interrogated by police in the past week have been quizzed on the activities of the Fenguri Law Firm and ordered not to speak publicly about the firm.

Under international law, authorities must immediately inform detainees of the reasons for their arrest, and provide them with an effective opportunity to challenge the legality of their detention before a court, and with prompt access to medical care if requested.

Amnesty International continues to collate and verify information on individuals targeted in the crackdown. For the latest full information including names and current status please click here [updated daily]

Total number of lawyers and activists still missing or in police custody: 31