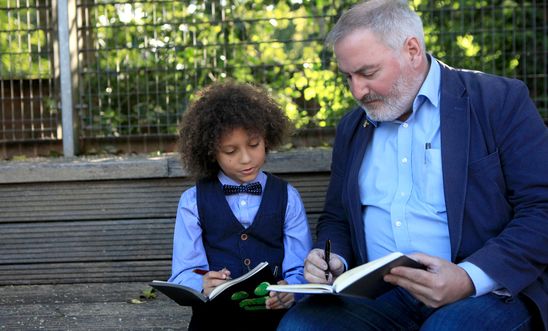 In the UK thousands of children can’t claim British citizenship due to extortionate costs; child refugees are denied the right to family reunion; school libraries continue to close

As he steps down as Children’s Laureate, Chris Riddell highlights human rights concerns and calls on next government to address them

Chris Riddell, UK Waterstones Children’s Laureate and Amnesty Ambassador, has raised concerns about children’s rights in the UK in a final statement before handing over his laureateship on 7 June, a day ahead of the General Election.

In a statement, Riddell has called on the next government to urgently address three human rights issues that affect children in the UK: 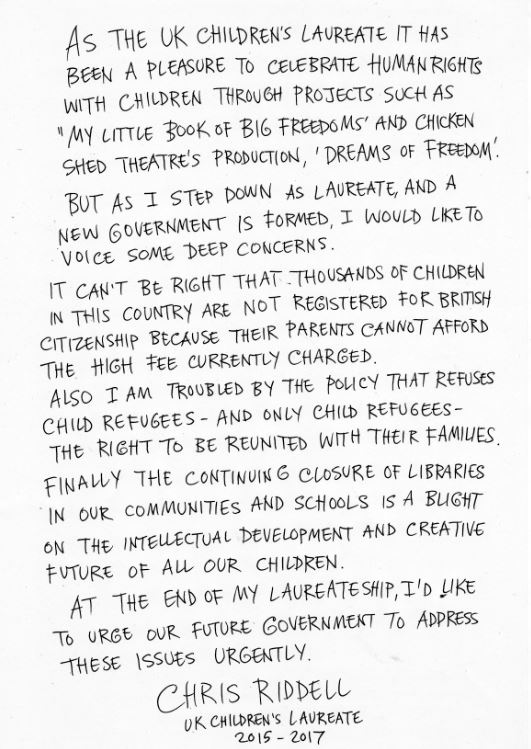 Riddell became an ambassador for Amnesty International UK last year. Amnesty has been campaigning for the expansion of family reunion to children, and for provisions to be put in place to support children to access their right to register as British citizens, including through the removal of the profit-making aspect of the registration fee.

Riddell has championed human rights during his time as Children’s Laureate, and today’s intervention comes ahead of two new projects he has worked on with Amnesty that will celebrate human rights for children:

“Amnesty is delighted that the Children’s Laureate has done so much to make human rights fun for children. The right to laugh, to draw, to read and play are just some of the freedoms that we should all be able to enjoy and treasure. No matter what our age, it is important we learn about the rights that keep us safe, so that we can protect them.

“It is devastating that many children living in the UK don’t have access to the rights that should be there to keep them from harm. I sincerely hope the new government listens to Chris Riddell’s warning and takes action before more children’s lives are threatened.”

·      Access to citizenship -  An estimated 120,000 children living in the UK have neither British citizenship nor immigration permission to be here. More than half of them were born in the UK and many are entitled to register as British citizens under the British Nationality Act 1981. Many children are essentially prevented from accessing their rights to register as British citizens because they and their families cannot afford the extortionate and profit-making fee.The government is now charging children £973 to apply, and making a £587 profit on every application – the stated processing cost of an application being just £386. Without their right to British citizenship, these children may miss out on opportunities such as funding for higher education, a British passport or the right to vote; and in later life the opportunity to pass on their citizenship to their children. Amnesty is calling for: the removal of the profit-making aspect of the fee; the introduction of a fee waiver for cases where a child’s parent or other carer would be unable to afford the fee; and the charging of no fee for registration in cases of children assisted by a local authority under the Children Act 1989.

·      Child refugees and family reunion – Child refugees are the only refugees that the UK government denies the right to family reunion.  Every year, several hundred unaccompanied children are among the thousands of people recognised by the Home Office as refugees and entitled to asylum in this country. They should be able to have the best chance at overcoming the trauma of escaping conflict and rebuilding their lives in a new country, but being forcibly separated from their families denies them this right. This is clearly contrary to an international legal obligationto ensure the best interests of children is a primary consideration in policy and practice. Amnesty is calling for the extension of family reunion to child refugees.

·      Libraries and the right to knowledge and information - Chris Riddell has long fought for the protection of school and public libraries as a “vital resource that must be nurtured”, including by writing an open letter to the Education Secretary last year to ask the UK government to investigate school library closures.

Chris Riddell became an Amnesty Ambassador in 2016. He is the Waterstones Children’s Laureate 2015-2017, and will hand over the title to a new Laureate on Wednesday 7 June 2017.