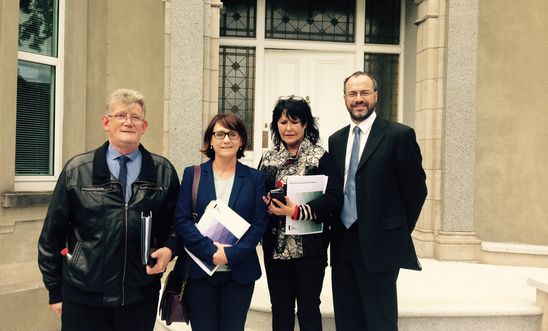 Victims of child abuse have told Archbishop of Armagh Eamon Martin that the Catholic Church should show leadership by setting aside funds for a compensation scheme.

They made the call after emerging from a meeting with the leader of Ireland’s Catholic Church at his residence in Armagh, which was also attended by a representative of Conference of Religious of Ireland (CORI), the umbrella body of Catholic religious orders.

Meeting the Archbishop today, at his request, were victims’ campaigners Margaret McGuckin and Jon McCourt, Prof Patricia Lundy of Ulster University and Patrick Corrigan of Amnesty International.   They represent the Panel of Experts on Redress, an independent initiative made up of survivor groups, individual survivors, academics, lawyers, human rights organisations, practitioners and national and international experts.

The Panel has asked the Northern Ireland Executive to establish a redress scheme for victims of historical child abuse and today they told Catholic Church leaders that they want it to contribute significant funds to the scheme.

“It is the responsibility of the Northern Ireland Executive to set up a redress scheme for victims of institutional abuse here, but the Catholic Church and religious orders which ran homes where we were abused, have a moral and financial responsibility to victims.

“We have asked the Archbishop to tell Executive Ministers that the Church stands ready to contribute significant funds to a government-run redress scheme. Other organisations, private or public, which ran homes where abuse took place bear a similar responsibility.”

“Nothing will make up for the damage done to us when we were children, but financial redress is one way for the Church, religious orders and government to say ‘sorry’ for what was done to us and so many others.

“Moral leadership requires not just an acknowledgement of past failings, but a willingness in the here and now to try to make good the harm that was done.”

The report draws on wide consultation with survivors, research and analysis of survivors’ views on redress. Recommendations have been informed by redress schemes in other jurisdictions and examples of good practice - what worked or did not work in other countries.

The Historic Institutional Abuse Inquiry, chaired by Sir Anthony Hart, is scheduled to report to the Executive in January, 2017.  The Inquiry on November 4, 2015, after 157 days of public hearings and 392 witnesses, stated: “… what we can now say is that from the evidence we have heard so far we will recommend that there should be a scheme to award financial compensation to those children who suffered abuse in children’s homes and other institutions in Northern Ireland between 1922 and 1995.”