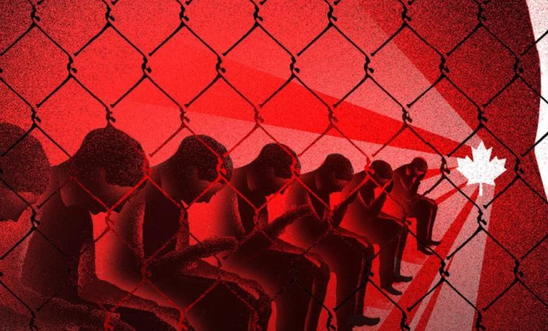 Dozens of children - including infants - ‘housed’ in detention

African migrants held for longest periods, with some detained for more than a year

‘There should be no place in Canada for racism, cruelty and human rights violations against people coming to this country seeking safety’ - Ketty Nivyabandi

Canada is incarcerating thousands of people - including those with disabilities - on immigration-related grounds every year in often abusive conditions, Human Rights Watch (HRW) and Amnesty International said today in a major new report ahead of World Refugee Day.

In the same period, another 136 children were “housed” in detention to avoid separating them from their detained parents, including 73 children below the age of six.

One woman from an African country who was detained on arrival in Canada in 2019 told researchers:

“I felt like the world was ending for me. I wasn’t told what was happening, what I did wrong. I told [the border officer] everything that happened to me back home, and how I escaped for my life … But she didn’t understand me, and she didn’t let me explain … I thought, ‘Maybe I should have stayed back home and died there.’”

HRW and Amnesty’s 100-page report - ‘I Didn’t Feel Like a Human in There’ - shows how those in immigration detention, including people fleeing persecution, are held with little or no contact with the outside world. With no set release date, they can be detained for months or even years. Though not held on criminal charges or convictions, many immigration detainees experience Canada’s most restrictive confinement conditions, including maximum-security provincial jails and solitary confinement. They are handcuffed, shackled, searched and restricted to small spaces with rigid routines under constant surveillance. Those with psychosocial disabilities - or mental health conditions - experience discrimination throughout.

The Canada Border Services Agency remains the country’s only major law-enforcement agency without independent civilian oversight. The agency’s unchecked exercise of its broad mandate and enforcement powers has repeatedly resulted in serious human rights violations in the context of immigration detention, HRW and Amnesty said.

“Canada prides itself on welcoming refugees and newcomers with open arms, even though it’s one of the few countries in the global north where people seeking safety risk being locked up indefinitely.

“This leaves many without the certainty - or even hope - of knowing when they will be free again, which can have a devastating impact on their mental health.”

“Canada’s abusive immigration detention system is in stark contrast to the rich diversity and the values of equality and justice that Canada is known for globally.

“There should be no place in Canada for racism, cruelty and human rights violations against people coming to this country seeking safety and a better life.

“Amnesty International and Human Rights Watch call on the Canadian authorities to end the inhumane treatment of people in the immigration and refugee protection system by gradually ending immigration detention in Canada.”

Those with psychosocial disabilities

HRW and Amnesty found that people with psychosocial disabilities are more likely to be detained in provincial jails rather than immigration holding centres. In Ontario’s provincial jails, migrants with psychosocial disabilities are often placed in solitary confinement. They cannot make independent decisions about their legal position, with legally-appointed representatives making decisions on their behalf. Many also face significant barriers to release, and once released must adhere to strict release conditions - which can lead to re-arrest if breached.

HRW and Amnesty also found that many immigration detainees develop suicidal thoughts as they begin to lose hope they will be released. Those fleeing traumatic experiences and persecution are particularly affected. Many former immigration detainees continue to live with the effects of psychosocial disabilities developed during incarceration for months or even years after their release.

The Canadian government should stop holding people with physical or psychosocial disabilities in immigration detention, HRW and Amnesty said. No one should be treated in a punitive manner for immigration-related reasons, including being held in solitary confinement or facilities used for criminal law enforcement - such as jails or jail-like facilities.

Downloads
I Didn’t Feel Like a Human in There