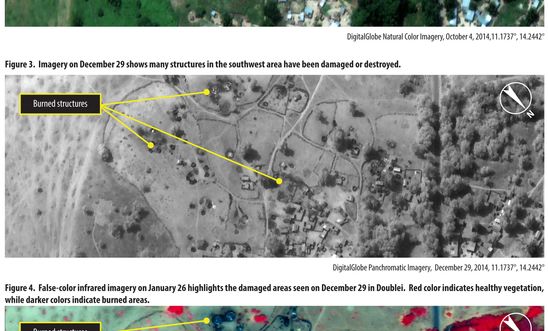 Based on three research missions in 2015, the 76-page report, Human rights under fire: attacks and violations in Cameroon's struggle with Boko Haram, documents how Boko Haram has killed at least 380 civilians since January 2014.

In response Cameroonian security forces have raided villages, destroying homes, killing civilians and detaining over 1,000 suspects, some as young as five years old. Serious incidents have not been effectively investigated, including one where at least 25 people died in custody. More than 130 people remain missing.

“As Boko Haram has brought its violence to Cameroon, civilians have come increasingly under fire. By killing indiscriminately, destroying civilian property, abducting people and using children as suicide bombers, they have committed war crimes and caused untold fear and suffering to the civilian population.

“At the same time, while providing much needed protection to civilians, the response by Cameroonian security forces has also been marred with serious violations. Cameroon’s security forces have killed civilians unlawfully or through excessive use of force. People have been arbitrary arrested, and many held in inhumane conditions which have led to dozens of deaths.”

Since mid-2014, Boko Haram fighters have attacked scores of towns and villages in the far north of Cameroon, killing and kidnapping civilians, burning down hundreds of houses and looting livestock and other property.

One witness told Amnesty how the insurgents set alight more than 150 houses: “Neighbourhood after neighbourhood, they killed people and burned down everything”.

Heavy-handed response by the security forces

Since 2014, Cameroonian security forces have arrested and detained more than 1,000 people suspected of supporting Boko Haram. Most were arrested in mass “screening” operations or “cordon-and-search” raids where security forces round up dozens, sometimes hundreds, of men and boys. The majority of them are held in appalling conditions at Maroua prison. Overcrowding, lack of sanitation and inadequate health care led to the death of at least 40 prisoners between March and May 2015 alone.

When Amnesty visited Maroua prison in May 2015, it had no running water and fewer than 20 latrines for more than 1,200 people. Visiting a hospital where sick prisoners were kept during the same period, Amnesty International researchers found that severely malnourished patients were housed in a filthy room, with at least three half-naked detainees sleeping on the floor, one in his own excrement. Work to increase prison capacity has begun, but will take many months to complete.

In carrying out security operations, the military have used excessive or lethal force. In one cordon-and-search operation at least eight people, including a child, were killed and more than 70 buildings were burnt down in the villages of Magdeme and Doublé on 27 December 2014.

One witness told Amnesty: “Soldiers shot in the house. My sister and her seven year-old daughter were killed while hiding under the bed. My sister was shot on the right side of the head and her daughter in the neck.”

Satellite images and photos confirm the scale of destruction by the security forces described by dozens of witnesses.

In addition to the deaths and destruction, at least 200 men and boys were arrested during this operation. They were taken to the Gendarmerie Headquarters in Maroua and locked in two storerooms, where many died overnight. Nearly three months after the incident the authorities said that 25 people lost their lives in the makeshift cells, yet have failed to reveal the identities of the victims, the cause of their death, or the location of their bodies. While 45 of those arrested were taken to prison the following day, at least 130 of the men and boys arrested in the two villages remain unaccounted for.

“It is unacceptable that nearly nine months after the mass arrest of 200 men and boys, most of their families still do not know whether they are dead or alive. A thorough, impartial and independent investigation is needed to ascertain what happened and hold those responsible to account.

More than 160 people were interviewed for the report. Amnesty conducted three research missions in northern Cameroon in February, March and May 2015, as well as follow-up research between June and August 2015. Victims of and eyewitnesses to attacks committed by both Boko Haram and Cameroonian security forces were among those interviewed, as well as government officials, including the Minister of Justice, members of the security forces, journalists, human rights defenders, diplomats, humanitarian workers, and other experts.

Based on the evidence gathered, Amnesty believes that an internal armed conflict is taking place in the region – which appears to be a spillover of the conflict in Northern Nigeria – and that international humanitarian law, the laws of war, now apply.

On 20 December 2014, security forces raided Qu’ranic schools in the town of Guirvidig, arresting 84 children, 47 of whom were under 10 and the youngest was just five. Authorities claimed the schools were being used as fronts for Boko Haram training camps. They were held for over six months without access to their families, before being released in June 2015.

Boko Haram now calls itself the “Islamic State's West Africa Province”. Cameroon’s President has deployed at least 2000 troops of the BIR (Rapid Intervention Battalion) alongside forces from the BIM (Mobile Intervention Battalion) to combat Boko Haram’s violence. Amnesty wrote to the Cameroonian authorities in July 2015 requesting responses to its research findings, but received no response.