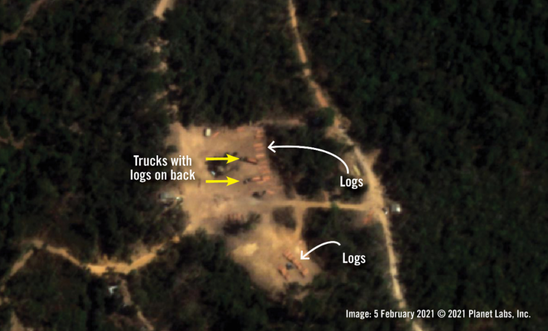 Prey Lang at grave risk, one year after environmental defenders were banned from patrolling wildlife sanctuary

Recent images and remote sensing data reviewed by Amnesty’s Crisis Evidence Lab reveal that illegal logging – the main cause of deforestation in Prey Lang – is continuing apace, with widespread forest clearings and new roads cleared within the protected area.

Richard Pearshouse, Head of Crisis and the Environment at Amnesty International, said:

“The Cambodian authorities must allow these environmental defenders to resume their patrols and carry out their vital work preventing further destruction of one of the world’s most important rainforests, which is disappearing before our eyes.”

Last week, the Ministry of Environment rejected a request by members of the Prey Lang Community Network (PLCN) to hold their annual tree blessing ceremony in Prey Lang on 25 February.

PLCN members – most of whom are Indigenous Kuy – were forcibly prevented from holding the event inside the forest last year and have since been banned from entering the wildlife sanctuary to conduct their community patrols. This ongoing repression seriously undermines environmental efforts to protect Prey Lang and Indigenous peoples’ rights.

Prey Lang is mainland Southeast Asia’s largest lowland evergreen forest, covering approximately 500,000 hectares across four provinces. In 2016, much of the forest was designated as a wildlife sanctuary.

More than 250,000 people live in and around Prey Lang, most of whom identify as Indigenous Kuy. Prey Lang is a crucial part of the Kuy people’s livelihood, culture and spirituality.

Amnesty’s review of satellite imagery clearly shows a worrying trend of rampant illegal logging in Prey Lang, including within the borders of its wildlife sanctuary. Images taken on 5 February 2021 show many piles of logs visible in a newly cleared area just outside Prey Lang. They also show new access roads that were not visible in previous imagery from January 2020.

In the last 12 months, environmental defenders have been systematically targeted by Cambodian authorities in retaliation for their environmental protection work.

Earlier this month, Ministry of Environment officers arrested and arbitrarily detained five environmental defenders, including renowned activist Ouch Leng, while they were investigating illegal logging in Prey Lang. They were only released three days later, after signing a document committing them to refrain from entering Prey Lang without permission from the Ministry of Environment.

Several grassroots environmental groups, including PLCN, have been threatened based on accusations they are operating illegally because they are not registered under Cambodia’s widely-criticised Law on Associations and Non-Governmental Organizations. Since its introduction in 2015, the law has been overwhelmingly used to restrict the work of and punish independent and outspoken civil society actors. The law’s mandatory registration requirement for all associations violates Cambodia’s international human rights obligations.

Cambodian legislation and international human rights law guarantee the right of local communities and Indigenous peoples to participate in the sustainable management and conservation of protected areas. It also protects their access to traditional uses, local customs, beliefs and religions.

“The Cambodian authorities must end their relentless harassment of environmental and Indigenous defenders and organizations.

“They should also immediately revoke the ban on PLCN patrolling the Prey Lang Wildlife Sanctuary, and instead empower community groups to continue their work free from interference. Respecting the rights of Indigenous and community-based forest defenders is fundamental to the protection of Prey Lang.”

In December 2020, the Cambodian Ministry of Mines and Energy signed a deal for the construction of a 299km-long power transmission line from Phnom Penh to the border with Laos. This threatens further clearings, as the power line would divide Prey Lang in two.

“Authorities must cancel this planned transmission line that would slice through the heart of Prey Lang and instead opt for alternative routes that will not further destroy the forest. Viable alternatives, which protect Prey Lang as well as Indigenous peoples’ and local communities’ human rights, are clearly available.

“Unless the Cambodian government acts now to protect Prey Lang properly, the consequences will be devastating for the forest and local Kuy Indigenous communities.”