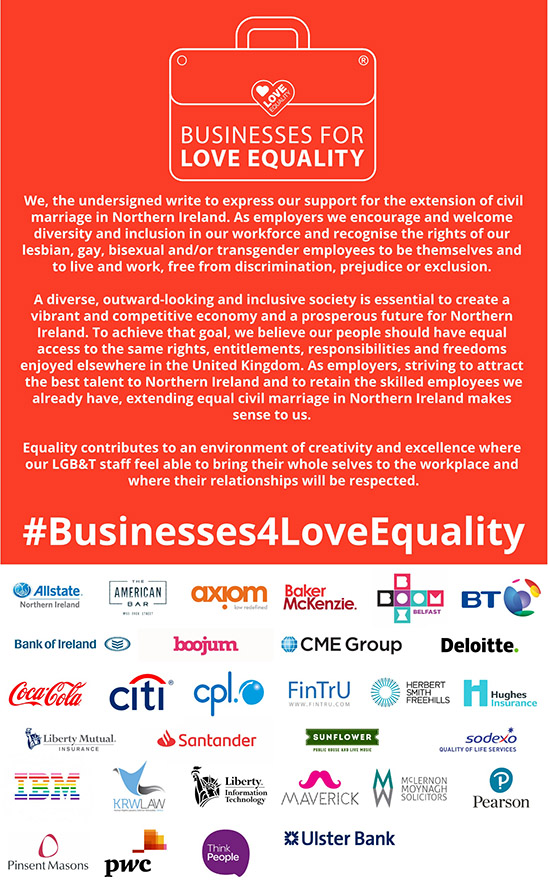 Leading businesses and employers across Northern Ireland - including Coca-Cola, Santander, Ulster Bank, Bank of Ireland and Deloitte (see full list below) - have added their voices to the calls for equal marriage in Northern Ireland.

Businesses and employers from across Northern Ireland have signed an open letter today expressing their support for the extension of civil marriage in Northern Ireland. The letter reads:

"We, the undersigned write to express our support for the extension of civil marriage in Northern Ireland. As employers we encourage and welcome diversity and inclusion in our workforce and recognise the rights of our lesbian, gay, bisexual and/or transgender employees to be themselves and to live and work, free from discrimination, prejudice or exclusion.

"A diverse, outward-looking and inclusive society is essential to create a vibrant and competitive economy and a prosperous future for Northern Ireland. To achieve that goal, we believe our people should have equal access to the same rights, entitlements, responsibilities and freedoms enjoyed elsewhere in the United Kingdom.

"As employers, striving to attract the best talent to Northern Ireland and to retain the skilled employees we already have, extending equal civil marriage in Northern Ireland makes sense to us.

"Equality contributes to an environment of creativity and excellence where our LGBT staff feel able to bring their whole selves to the workplace and where their relationships will be respected."

John O’Doherty, Director of The Rainbow Project and member of the Love Equality consortium, said:

"While many of the arguments for equal marriage are based on rights and equality, there is also an important economic argument.”

"There is a sound economic argument for marriage equality. Equality, diversity and inclusion contribute to a happy and productive workforce and can help in attracting global talent to Northern Ireland.

"However, without full legal recognition of same-sex marriages retaining and attracting talent can be difficult. The brain drain from Northern Ireland is a recognised fact and it is important that we reflect upon all of its causes, not least of all the fact that Northern Ireland remains the only part of these Islands not to recognise equal marriage.

"Bank of Ireland is proud to support the LGBT+ community in ensuring the same opportunities are available to all. Our commitment to inclusion, diversity, respect and equality extends to all of our customers and colleagues, and the communities we serve."

Cathy Donnelly, Senior Director of Talent at Liberty IT, said:

"Taking action to support Equal Marriage demonstrates our continued commitment to fostering diverse and inclusive workplaces globally, where all employees and customers feel valued and respected."

"As a socially responsible global organisation operating within Northern Ireland, it was an easy decision to add our name to the Open Letter for Marriage Equality. Our support is in line with our core values of Diversity, Respect and Inclusion, and we hope that this campaign will have a positive impact on our people, their families and the wider Northern Irish community. It was quite simply the right thing to do."

"At Pinsent Masons we value the diversity of our people, and we believe they should be treated equally, both at work and in their personal lives. The business case for marriage equality is compelling, both in terms of retaining and attracting talent, and also to send out a message to international investors that Northern Ireland is a modern, outward looking economy, with a progressive attitude on personal freedoms and rights."

Leigh Meyer, Managing Director of Citi Belfast, one of the signatories of the letter, said:

"Marriage Equality is an important right that we need to secure for all in Northern Ireland, I am proud that we in Citi Belfast are at the forefront of these collective efforts to ensure that it is approved and respected in our increasingly diverse and inclusive community. As one of the largest employers in Northern Ireland we want to make our company as attractive as possible to every single part of the population, to give people a reason to want to work for us and to work with us.  Citi enables progress, mobility, and inclusion for our LGBT employees and clients."

"At Baker McKenzie we believe that all LGBT+ people in Northern Ireland should have the same marriage rights as the rest of the UK. Here in Belfast, we have a well-established LGBT+ network and are pleased to be joining other leading companies to send a powerful message, encouraging others to respect and support the LGBT+ community."

"As one of the world’s most inclusive brands, Coca-Cola celebrates diversity, inclusion and equality. This commitment not only manifests itself in our advertisements, but also in our daily operations. At Coca-Cola, we know that creating an environment where everyone can reach their full potential, regardless of gender, age, sexual orientation, ethnicity, religion, ability or socio-economic background, is key to driving businesses forward. We also believe that everyone has the right to be themselves both outside and inside the workplace, which is why we support this important initiative."

"At Cpl we recruit regardless of orientation, religion, gender or ethnicity and we want all of our people to feel they can bring their whole selves to work and reflect this in their personal lives. We strongly feel equal marriage rights should be available to all in Northern Ireland and add our support to this letter."

"As a major UK business, we recruit talent regardless of gender, ethnicity or orientation. Extending equal civil marriage to Northern Ireland is important to our people and to reinforce our UK-wide commitment to be a welcoming equal-opportunity employer."

"At Ulster Bank, we pride ourselves in being a truly inclusive and diverse organisation for and colleagues and customers.   We want to do what we can to ensure our customers, colleagues and the LGBTQ+ community in Northern Ireland have the same rights extended to them as the rest of the UK and Ireland."