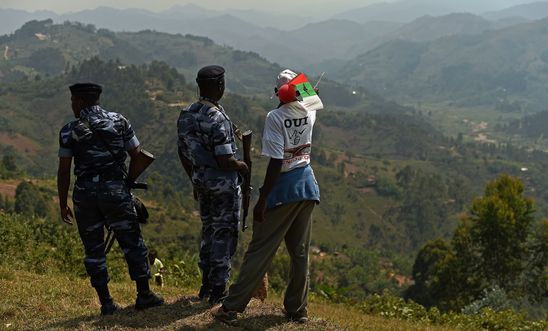 More than 400,000 people have fled Burundi since conflict began in April 2015

“One day they tortured us in an atrocious way. They took a bottle filled with sand and hung it from our testicles” – young man who was detained in northern Burundi

Thousands of Burundian refugees are coming under increasing pressure to return to their home country but would be at risk of death, rape or torture if they did, Amnesty International can reveal in new research published today (29 September).

The new Amnesty report, Conform or flee: Repression and insecurity pushing Burundians into exile, is the result of 129 interviews with Burundian refugees in Tanzania and Uganda. It comes as the UN Human Rights Council is due to decide whether to renew the Commission of Inquiry of Burundi.

The majority of people Amnesty interviewed said they left Burundi due to insecurity and repression at the hands of the police, the intelligence agency and the army. The Imbonerakure, the increasingly militarised youth wing of the ruling National Council for the Defence of Democracy – Forces for the Defence of Democracy (CNDD-FDD) party, is also carrying out human rights violations against perceived government opponents, including killings, unlawful detentions, rape and torture. Amnesty’s findings expose the pervasive climate of fear in Burundi more than two years after the president’s decision to seek a third term ended in crisis.

Despite this, there is mounting pressure on Burundian refugees to return to their home country. In January this year, Tanzania stopped automatically granting refugee status to Burundian asylum-seekers, and Uganda followed suit in June. The Burundi government has meanwhile been pressing refugees to return. On a visit to Tanzania in July, Burundian President Pierre Nkurunziza called on the more than 240,000 refugees there to return home. His comments were echoed by President John Magufuli of Tanzania, whilst other senior Burundian officials have taken the same message to Uganda’s refugee settlements.

“While the Burundian government says all is well and urges refugees to return, more Burundians continue to flee the country due to repression and insecurity.

“Let’s be clear, Burundi has not yet returned to normality and the government’s attempts to deny the horrific abuses still taking place within the country should not be given credence.

“Belonging to an opposition party, associating with opposition members, refusing to join to the ruling party or simply trying to leave the country is enough to create suspicion and the threat of arrest or worse.

“In these circumstances, it is imperative that Tanzania and Uganda continue to provide a safe haven for Burundian refugees in line with international law.”

Sixteen people told Amnesty that they were tortured or ill-treated while in detention. One of them, a young man who was detained for a week in May this year in Kirundo Province, northern Burundi, said he was held in a tiny unlit room with three others, repeatedly beaten with batons, and made to eat his meals in the toilet next door.

“They tortured us to make us confess that we worked with the rebels. One day they tortured us in an atrocious way. They took a bottle filled with sand and hung it from our testicles,” he said.

One woman described being raped by Imbonerakure members near the border. She said: “They asked me: between killing you and raping you, what do you choose? I told them I didn’t want to be killed”.

“Many refugees are still traumatised by the human rights violations and abuses they suffered or witnessed. Neighbouring countries must continue to welcome them and protect them from harm.”

“The Burundi authorities would like the world to turn their attention away from the human rights violations and abuses being committed in the country. The Human Rights Council must refuse to allow this to happen.”

According to the UN refugee agency (UNHCR), more than 400,000 people have fled Burundi since the conflict began in April 2015. They are hosted primarily in Tanzania, Uganda, Rwanda and the Democratic Republic of Congo. Only 6% of the funding requested for the UNHCR’s Burundi Regional Refugee Response for 2017 has been received. Within Burundi itself, more than 200,000 people (roughly 2% of the population) are internally displaced.