Belfast Court of Appeal abortion ruling 'an insult to women' 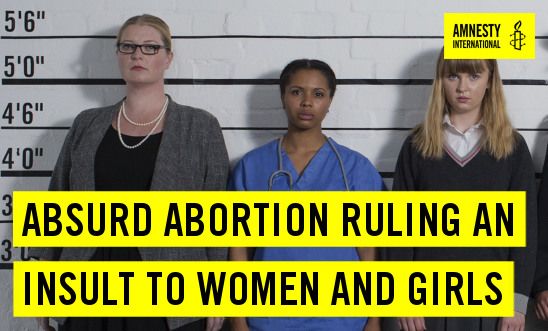 The Court of Appeal in Belfast has ruled today that Northern Ireland’s highly restrictive abortion laws are not in breach of human rights standards, a decision Amnesty International called “absurd” and “an insult to women and girls”.

The court assessed whether a High Court ruling in 2015 that current laws, which prohibit abortion even in the case of rape or incest or where the foetus has a fatal defect, breach women’s right to privacy. It also looked at whether the laws are at odds with the right to be free from cruel and degrading treatment and discrimination.

“Today’s absurd ruling is an insult to women and girls and to everyone across the country who cares about justice. The judges had a chance to put right centuries of human rights abuse but with a flick of the pen they’ve just let down another generation of women and girls in Northern Ireland.

“Stormont has been failing women for too long and must act urgently to reform Northern Ireland’s abortion laws and prioritise bringing legislation into line with international human rights standards, as previously called for by UN committees.
This must include the decriminalisation of abortion. Women must no longer be forced to leave Northern Ireland for healthcare to which they are legally entitled.”

Sarah Ewart, whose first pregnancy was given a fatal foetal diagnosis and had to travel to England to terminate her pregnancy, said:

“This is a dark day for women’s rights in Northern Ireland. Today’s court ruling means that I, and women like me, will continue to be treated as second-class citizens, forced to leave Northern Ireland if we need to have a termination and denied the right to healthcare provided by doctors and midwives who know our situation.

“Northern Ireland’s laws made my situation a living nightmare. I asked politicians for help and they failed to bring about the changes needed, and now the courts have joined them in refusing women their rights. It’s shocking that this should be the case in 2017, but we will continue to fight for women in Northern Ireland to be given access to healthcare like women in the rest of the UK.”

The original judicial review was taken by the Northern Ireland Human Rights Commission; Amnesty International was a party to the case in both the High Court and Court of Appeal.

The ruling comes after the Speaker of the House of the Commons accepted a cross-party amendment to the Queen’s Speech asking the UK Government to ensure access to NHS-funded abortions in England for women from Northern Ireland earlier today.