Bangladesh: Online freedom of expression under threat as crackdown intensifies 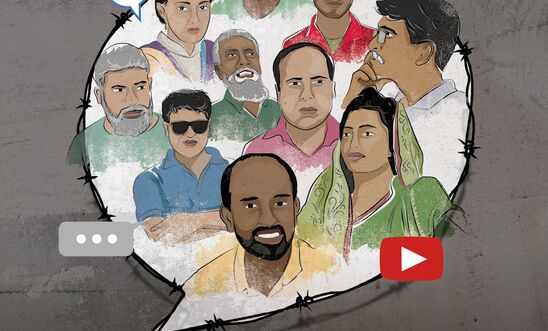 Most face allegations of publishing false and offensive information online

Draconian Digital Security Act must be amended, or repealed

Bangladeshi authorities must end the crackdown on right to freedom of expression online and urgently repeal or amend the draconian Digital Security Act (DSA), Amnesty International said in a new briefing released today.

Introduced in October 2018, the DSA - a law that contains overbroad and vague provisions granting authorities extensive powers - is increasingly being used to stifle dissent online, with punishments that can extend to life imprisonment.

The briefing, No space for dissent: Bangladesh’s Crackdown on Freedom of Expression Online, examines cases under the DSA against 10 people who have been subjected to a wide range of human rights violations simply for criticising powerful people on social media.

At least 433 people are currently imprisoned under the DSA as of this month, most held on allegations of publishing false, offensive, derogatory or defamatory information online. Those targeted include journalists, cartoonists, musicians, activists, entrepreneurs and students, amongst others.

“The actions taken by the authorities under the purview of the DSA demonstrate just how dangerous it has become to speak out and voice dissenting views in Bangladesh today.

“These undue restrictions on different forms of expression have sent a chilling effect across Bangladeshi society and have severely curbed the space for independent media and civil society organizations.

“The Bangladeshi authorities must release all prisoners held solely for exercising their right to freedom of expression.”

The DSA gives arbitrary powers to law enforcement agencies to conduct searches, seize devices, and arrest individuals without warrant simply for a comment they may have shared online, in violation of the right to freedom of expression enshrined under the International Covenant on Civil and Political Rights to which Bangladesh is a party. Amnesty is calling for the DSA to be repealed, unless it can be amended in compliance with international human rights law and standards.

In one case, writer Mushtaq Ahmed died in prison after languishing for 10 months without trial on accusations under the DSA. One inmate alleged that he was subjected to torture.

Ahmed was arrested in May 2020 for criticising the Bangladeshi government’s response to the Covid-19 pandemic on Facebook. After being denied bail at least six times, he reportedly died of a heart attack in prison on 25 February 2021.

On 26 February 2021, rights activist Ruhul Amin was arrested for a Facebook post criticising the Bangladeshi government and Prime Minister Sheikh Hasina for the death of Ahmed. He was subjected to intrusive questioning and imprisoned for 45 days before he was eventually released on bail.

Saad Hammadi added: “Mushtaq Ahmed should not have spent a single minute in prison, let alone his final ones. Many provisions in the DSA are criminalising conduct that should not constitute an offence in the first place. We urge the authorities to break away from this practice of using the law as a weapon against dissent.”

Amnesty has found a concerning pattern that indicates authorities are weaponising different sections of the DSA to target and harass critical voices.

Cases against eight out of 10 individuals featured in the briefing have been filed by lawmakers, members of ruling Awami League party or law enforcement officials.

A law enforcement official told Amnesty that it is their responsibility to contain criticism against the government. Yet international human rights law is clear that criticism of the authorities can never be legitimately punished.

The way in which defamation is criminalised under the DSA shows the serious shortcomings of a criminal approach to defamation, where the law has been further instrumentalised to silence dissent. Amnesty is calling on the Bangladeshi authorities to ensure that defamation is treated as a matter for civil litigation, not criminal.

The Cyber Tribunal in Dhaka has dismissed nearly 50 per cent of the cases (or 97 out of 199) during the period under review for lacking merit and evidence. However, many people have still endured human rights violations in that time, including facing detention even before the cases appeared for trial.