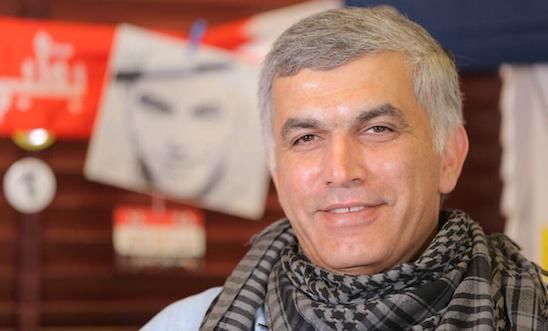 The sentencing of the Bahraini human rights activist Nabeel Rajab to two years in prison for criticising Bahrain in several TV interviews is the latest shocking display of zero tolerance for freedom of expression by the Bahraini authorities, Amnesty International said today.

Earlier today the High Criminal Court in Manama found Rajab guilty of “publishing and disseminating rumours and false news” in relation to TV interviews he gave in 2015 and 2016.

Mr Rajab has been in and out of prison since 2012 on charges related to his peaceful human rights activism, and he’s been banned from leaving Bahrain since November 2014. Most recently he was jailed in June 2016 over tweets he made that alleged torture in a Bahraini prison, as well as voicing criticism of the killing of civilians in the Yemen conflict by the Saudi Arabia-led military coalition. On 28 December, a Bahraini court ordered Rajab’s release, but the authorities refused to carry this out - instead he was immediately re-arrested and taken into custody in relation to his TV interviews. His trial began on 23 January.

Rajab was held in solitary confinement for over nine months of his detention until his transfer to the Ministry of Interior Hospital in al-Qalaa, having suffered from complications following surgery in early April. Prolonged and indefinite solitary confinement violates the prohibition of torture and other ill-treatment. Despite medical reports issued by the hospital confirming that he could not attend his hearings, the court continued the trial. On 14 June Rajab’s defence lawyers and diplomats from the USA, the UK and Australia walked out of court when the judge rejected the lawyers’ request to postpone the trial until Rajab was fit to attend.

“Imprisoning Nabeel Rajab simply for sharing his opinion is a flagrant violation of human rights, and an alarming sign that the Bahraini authorities will go to any length to silence criticism.

“Nabeel Rajab should be commended for shedding light on allegations of serious human rights abuses; instead, Bahrain’s government and judiciary have once again tightened their chokehold on freedom of expression and branded him a criminal. No one should be jailed for speaking out about human rights.

“Nabeel Rajab has been persecuted for years for speaking out against human rights abuses. We reiterate our call on the Bahraini authorities to immediately and unconditionally release him, and we are urging them to end their crackdown on freedom of expression and ensure the right of everyone in Bahrain to peacefully express themselves.”

Rajab faces up to 15 years in jail in separate case

In the separate case, Nabeel Rajab is also being tried on charges of “spreading false rumours in time of war”, “insulting public authorities [the Ministry of Interior]” and “insulting a foreign country”, in relation to comments he posted and retweeted on Twitter relating to the war in Yemen and allegations of torture in Jaw prison in  Bahrain. This trial began on 12 July 2016 and was postponed numerous times. If convicted in this case, Rajab faces 15 years in prison. His next hearing is scheduled for 7 August.

On 21 December - following a piece published a day earlier and written in his name in the French newspaper Le Monde in which he calls on France and Germany to reassess their relationship with the countries of the Gulf Cooperation Council - Rajab was charged with “spreading false news and statements and malicious rumours that undermine the prestige of Bahrain and the brotherly countries of the GCC, and an attempt to endanger their relations.”  Rajab was also charged with “undermining the prestige of the state” in relation to another piece published in his name in the New York Times in September 2016, in which he describes the conditions of his detention. It is not known whether he will face trial on either charge.

Rajab’s imprisonment is one of a long list of repressive measures taken by Bahraini authorities since May 2016. In September, Amnesty, alongside 21 other NGOs, wrote to the governments of 50 countries calling on them to press for Rajab’s release.