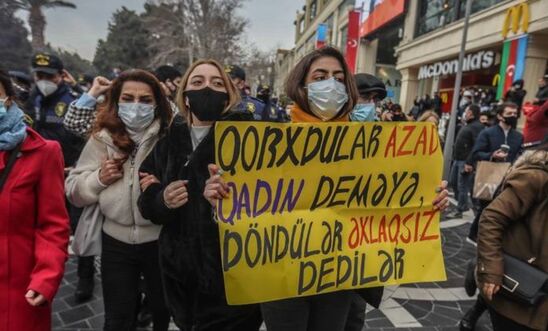 Women who have played a prominent role in campaigning for women’s rights in Azerbaijan are being subject to reprisals and threats, Amnesty International said in a new briefing today (12 May).

In the new briefing, Azerbaijan: Gender-based reprisals against women must stop, Amnesty shows how the Azerbaijani authorities have sought to defame and silence women activists.

In the past two years, at least 15 women have been subjected to a range of targeted harassment by the security forces backed by the government - including being blackmailed via their social media accounts; having their private conversations publicised, sometimes material of a sexual nature; and being accused of being “bad wives” or “bad mothers”.

Amina Rustamzade, the wife of activist and former prisoner of conscience Ilkin Rustamzade, attempted to take her own life in July last year following personal attacks on her. A profile of her was advertised on an escort site releasing her contact details, and she has also faced repeated threats to expose details about her private life.

The organisers of this year’s International Women’s Day march in the capital Baku - which was dispersed by security forces - have been targeted. One of the organisers, Gulnara Mehdiyeva, had her social media accounts hacked, and private photos of her surfaced online. Another organiser, Narmin Shahmarzade was also targeted, with her private conversations posted online.

“This is part of a deliberate strategy to muzzle critics of the Government and suppress women’s activism.

“By shaming and blackmailing these women activists, the authorities believe they will renounce their lawful activism or pressure their partners to do so."

Amnesty is calling on the Azerbaijani authorities to ensure gender-based violence and discrimination targeting women activists in Azerbaijan is halted immediately. They must conduct a prompt, impartial and effective investigation into each incident, as well as into other violations of their human rights, such as their right to privacy.