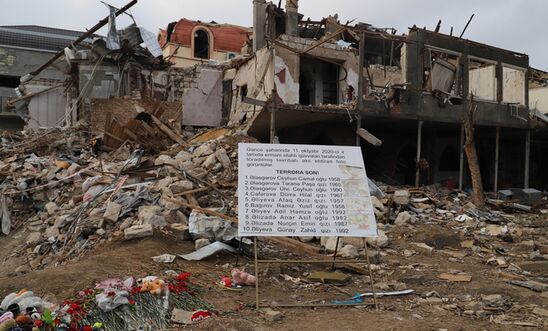 On-the-ground investigation into dozens of attacks, including with cluster munitions

Aysu Iskandarli, 7, killed by Armenian forces while playing on a swing in her garden

Arkadi Lalayal, 69, killed by Azerbaijani forces as he stood on his apartment balcony

Amnesty interviewed 79 survivors, witnesses and relatives of civilians killed and injured in the strikes, in addition to local civilian and military authorities, NGO workers and journalists, analysing fragments of munitions used in the attacks as well as videos, photographs and satellite images from the conflict.

In a new 23-page report - In the Line of Fire: Civilian casualties from unlawful strikes in the Armenian-Azerbaijani conflict over Nagorno-Karabakh - Amnesty’s investigation of 18 attacks by Armenian and Azerbaijani forces found that at least 146 civilians - including numerous children and older people - were killed in the 44-day conflict.

In violation of international humanitarian law, Armenian forces deployed inaccurate ballistic missiles, unguided multiple-launch rocket systems (MLRS) and artillery. Azerbaijani forces also used unguided artillery and MLRS. The authorities on both sides have denied launching indiscriminate strikes against civilian areas and using cluster munitions - despite clear evidence that they both did so.

“By using these imprecise and deadly weapons in the vicinity of civilian areas, Armenian and Azerbaijani forces violated the laws of war and showed disregard for human life.

“Our research revealed a pattern of indiscriminate and disproportionate strikes by both sides that killed and harmed civilians and damaged civilian objects.

“The Armenian and Azerbaijani authorities must launch immediate, impartial investigations into their forces’ relentless and often reckless use of heavy explosive weapons in populated civilian areas.”

Amnesty documented eight strikes carried out by Armenian forces on towns and villages in Azerbaijan that killed a total of 72 civilians.

On 17 October, in the city of Ganja 21 civilians were killed and more than 50 injured when a SCUD-B ballistic missile hit the Mukhtar Hajiyev neighbourhood. Ramiz Gahramanov, 64, told Amnesty that his daughter Khatira, 34, was killed in the strike along with her son Orhan, 11, and two daughters Maryam, six, and Laman, 18. In the aftermath of the blast, Ramiz said:

“I looked down and when I saw that the house had been completely destroyed, I immediately knew that they had all died because nobody could have survived such destruction. I could not find the bodies of my grandchildren. Parts of their bodies were not found until days later, in the next street, and some parts were not found at all.”

On 27 October, five people were killed and 14 injured when Armenian forces launched a cluster bomb strike on the village of Qarayusufli, causing widespread damage to homes. One of those killed was seven-year-old Aysu Iskandarli, who was playing on a swing in her garden at the time.

Armenian forces also fired several large-calibre rockets into the city of Barda on 28 October, more than 20 km from the frontline. Three rockets landed in the city centre, two of them near hospitals. The third - a Russian-made 9M55 Smerch rocket containing 72 9N235 cluster submunitions - landed in the middle of a busy roundabout, killing 21 civilians.

Amnesty documented nine attacks carried out by Azerbaijani forces on towns and villages in Nagorno-Karabakh and one in Armenia, killing 11 civilians. According to local de facto authorities, at least 52 Armenian civilians were killed in the conflict.

The region’s main city, Stepanakert, came under frequent attack, sometimes several times in a single day. Some of the strikes were carried out using inherently indiscriminate weapons, such as 122mm Grad rockets and internationally-banned cluster munitions.

On 4 October, a series of attacks killed four civilians and injured a dozen more. Naver Lalayal told Amnesty how his 69-year-old father Arkadi was killed in this attack:

“Since the war started, my parents had been staying in the shelter in the basement of the building with other residents and came up to the apartment regularly to use the bathroom and the kitchen. That morning my father came upstairs and was standing on the balcony when a rocket exploded in the garden. He was killed on the spot and much of the apartment was destroyed.”

An independent weapons expert reviewed munition fragments at the site and identified them as “likely parts of an EXTRA ballistic missile,” an Israeli weapon known to have been sold to Azerbaijan. Several other locations in the city were struck the same day, including near a school the office of the International Committee of the Red Cross.

In other strikes on Stepanakert, it appeared that Azerbaijani forces deliberately targeted vital infrastructure, including the emergency services on a large compound on the eastern edge of the city. At around 2pm on 2 October, a rocket strike hit the adjacent car park, mortally wounding one of the rescuers, 25-year-old Hovhannes Aghajanyan, injuring ten of his colleagues and seriously damaging the hangar housing emergency vehicles.

On 27 September, in the town of Martuni 12 strikes in the space of four minutes included one that mortally wounded an eight-year-old girl, Victoria Gevorgyan, and left her two-year-old brother Artsvik badly injured and traumatised. Their mother, Anahit Gevorgyan, told Amnesty: “Victoria was our little angel. She is gone … My little boy now still wakes up saying that there are planes in the sky bombing.”