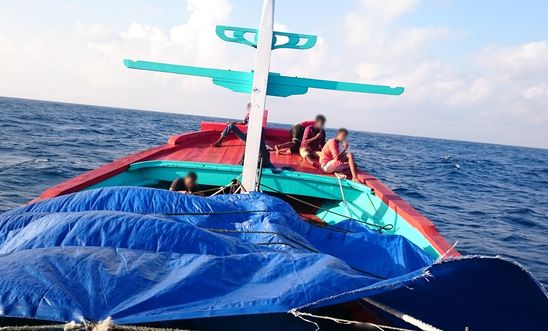 Photo taken by an asylum-seeker on a two-deck boat, prior to interception by Australian Navy and Border Force, May 2015 © Amnesty International

Through interviews with asylum-seekers, a boat crew and Indonesian police, the new report – By hook or by crook – exposes evidence that, in May of this year, Australian officials working as part of Operation Sovereign Borders paid six crew who had been taking 65 people seeking asylum to New Zealand USD 32,000 (around £20,000) and told them to take the people to Indonesia instead. The Australians also provided maps showing the crew where to land in Indonesia.

Witness testimonies backed by video footage reveal that an intervention by Australian officials endangered the lives of the people seeking asylum by transferring them to different boats that did not have enough fuel, and how the incident fits into a wider pattern of abusive “turnbacks” or “pushbacks” of boats.

The report also raises questions about whether Australian officials paid money to the crew of a second boat turned back in July.

“Australia has, for months, denied that it paid for people smuggling, but our report provides detailed evidence.

“All of the available evidence points to Australian officials having committed a transnational crime by, in effect, directing a people-smuggling operation, paying a boat crew and then instructing them on exactly what to do and where to land in Indonesia.

“People-smuggling is a crime usually associated with private individuals, not governments – but here we have strong evidence that Australian officials are not just involved, but directing operations.

“In the two incidents documented by Amnesty International, Border Force and Navy officials also put the lives of dozens of people at risk by forcing them onto poorly equipped vessels.

“When it comes to its treatment of those seeking asylum, Australia is becoming a lawless state.”

Since this incident was first reported in the media, Australian government officials have repeatedly denied paying people-smugglers and have claimed the border patrols were responding to a boat in distress at sea.

However, the crew members of the boat – interviewed by Amnesty in Indonesia in August where they are currently in police custody – as well as the passengers all say the boat was not in trouble and that they never made a distress call.

Australian border control officials initially approached the boat on 17 May and then again on 22 May. Most of the passengers– including a pregnant woman, two seven-year-olds and an infant – boarded a Border Force vessel after being told they could bathe there. Yet once aboard they were kept in cells for about a week. Some were denied medical care or access to their own medication.

On 31 May Australian officials transferred the crew and people seeking asylum onto two different and smaller boats, and the crew were given instructions to go to Rote Island in Indonesia as well as a map showing landing sites. The two boats had little fuel and one ran out of fuel while at sea. The terrified passengers were forced to do a dangerous mid-sea transfer onto the remaining boat and were eventually rescued by Indonesian locals after hitting a reef.

On the original boat, the six crew claim that Australian officials gave them a total of 32,000 USD. At least one person seeking asylum testified to Amnesty that he had witnessed the transaction. Indonesian police confirmed to Amnesty that they had found that precise amount of money on the crew when they arrested them on arrival in the country.

Amnesty’s investigation is based on interviews with the 62 adults seeking asylum, the six crew members and Indonesian officials. The organisation has also accessed crucial documentary evidence, including photos and a video taken by the passengers themselves during their journey. Indonesian police also showed an Amnesty researcher the money they confiscated from the six crew - in US 100 dollar bills.

By hook or by crook also documents a second case of possible payment by Australian officials to a boat crew to smuggle people to Indonesia in July. This case, unlike the May incident, has not received widespread media coverage. In the second instance, Australian officials again appear to have directed the crew of a boat to take people to Rote Island in Indonesia.

Passengers who were on the boat told Amnesty that they were intercepted by the Australian Navy and Border Force on 25 July, and then put onto a new boat on 1 August. By this time the boat crew had two new bags that the passengers had not seen before. When the passengers became suspicious and threatened to open the bags the Australians repeatedly told them not to.

These incidents took place in the context of Australia’s Operation Sovereign Borders (OSB), a military-led border control operation launched in 2013 to stop anyone – including refugees and people seeking asylum – from reaching Australia irregularly by boat.

Amnesty is calling for a Royal Commission into Operation Sovereign Borders, to investigate and report on allegations of criminal and unlawful acts committed by Australian government officials.

‘Push-backs’ violate the principle of non-refoulement, which says refugees cannot be sent back to countries where they are at risk and have a right  to have their asylum claims assessed.