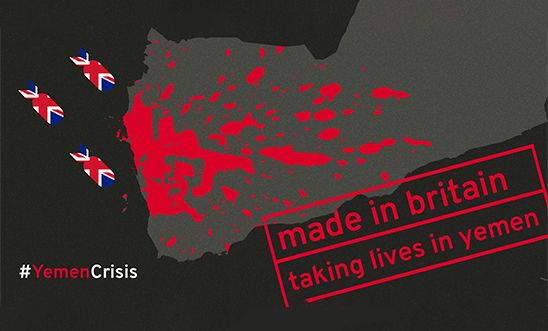 ‘This is a deeply disappointing outcome’ - James Lynch

A court ruling that the UK Government is entitled to continue authorising arms supplies to Saudi Arabia is a potentially “deadly blow” to Yemeni civilians, Amnesty International said in response.

The High Court in London dismissed a legal challenge from the NGO Campaign Against Arms Trade (CAAT), which claimed that such arms transfers should not take place because of the clear risk that the weapons supplied would be used to commit serious violations of international humanitarian law in Yemen’s armed conflict.

UK domestic law, EU law, the global Arms Trade Treaty (to which the UK is a state party), and the rules of customary international law require the UK to take steps to ensure that its arms transfers are not used to commit serious violations of international humanitarian law and of human rights law. Amnesty and other NGOs including Human Rights Watch and Rights Watch (UK) made submissions to the court during the judicial review.

All parties to the conflict in Yemen have committed serious violations, including possible war crimes. Amnesty and other NGOs and UN bodies have concluded that the Saudi Arabia-led coalition’s pattern of attacks across Yemen raises serious concerns about an apparent disregard for civilian life. A failure to take feasible precautions to spare civilians, as required by international humanitarian law, has led to civilian death and injuries and destruction of civilian homes and infrastructure.

Meanwhile, the coalition which supports the internationally-recognised Yemeni government in its conflict against the Huthi armed group and allied forces aligned with former President Ali Abdullah Saleh, has also bombed hospitals, mosques, markets and other civilian infrastructure, and frequently carried out disproportionate and indiscriminate attacks that have killed and injured civilians.

Since the conflict in Yemen began, more than 13,000 civilians have been killed and injured.

Materials revealed in court show that in February last year the head of the Export Control Organisation recommended to the then Business Secretary that exports to Saudi Arabia should be suspended.

“This is a deeply disappointing outcome which gives a green light to the UK authorities - and potentially Saudi Arabia’s other arms suppliers - to continue authorising arms transfers to the Kingdom despite the clear risk they will be used to commit violations.

“Irrespective of this ruling, the UK and other governments should end their shameless arms supplies to Saudi Arabia. They may amount to lucrative trade deals, but the UK risks aiding and abetting these terrible crimes.

“Extensive and credible reports - including Amnesty International’s own research on the ground in Yemen - have in our view demonstrated that such weapons have been used to commit serious violations, including war crimes, against civilians in Yemen and that - in light of the clear risk - authorising further transfers would be counter to the UK’s obligations under international law.

“The verdict is a deadly blow for Yemenis under attack from a Saudi Arabia-led coalition bolstered by UK-manufactured weapons.”

Last year, Amnesty revealed the use by the Saudi-led coalition of UK-manufactured cluster munitions in Yemen. One UK cluster bomb - a BL-755 - had apparently malfunctioned and left scores of deadly unexploded “bomblets” strewn over a wide area near a farm in Al-khadhra village in Hajjah governorate, six miles from the Saudi Arabia border. A local farmer reported seeing the cluster bomb attack in January 2016. For months after this, the UK Government denied that there was reliable evidence of the use of UK cluster munitions by the Saudi-led coalition in Yemen, but in December Defence Secretary Michael Fallon told the House of Commons that Saudi Arabia had given the UK a commitment over ceasing its use UK cluster bombs in Yemen.

According to UN figures, at least seven million Yemeni civilians are on the brink of famine, while the country is also facing the worst cholera outbreak worldwide with more than 200,000 suspected cases in the last two months. More than 21 million people are in need of some form of humanitarian assistance, and at least three million people have been forced to flee their homes since the current conflict began in March 2015.