Armenia/Azerbaijan: Use of artillery salvos and ballistic missiles in populated areas must stop immediately 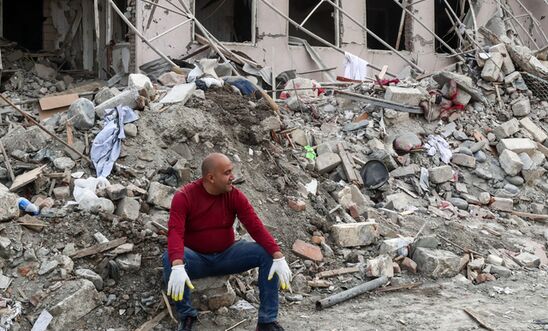 Both Armenia and Azerbaijan must immediately stop the use of heavy explosive weapons with wide-area effects in densely populated civilian areas, Amnesty International warned today.

Civilian casualties and severe damage to civilian buildings were reported most notably in the city of Ganja in Azerbaijan that has repeatedly suffered artillery shelling from the Armenian side in recent days, as well as in the Armenia-controlled Nagorno-Karabakh region.

“The evidence of the use of ballistic missiles and other explosive weapons with wide-area effects in civilian neighbourhoods tells a story of shocking disregard for life and the laws of war.

“Civilians continue to be killed, injured and left homeless as reckless strikes ruin lives and reduce homes to rubble.

“Photo and video evidence show the devastating damage that these weapons can cause as hospitals and schools have been reportedly destroyed, and other vital civilian infrastructure such as roads and communication networks damaged.

“We are once again calling on all parties to the conflict to prioritise the protection of civilians, and respect international humanitarian law. Using these types of weapons and weapon systems in populated areas must stop immediately.”

On 27 September, heavy fighting erupted between Azerbaijan and Armenia and Armenian-supported forces in Azerbaijan’s break-away region of Nagorno-Karabakh. In recent weeks, thousands of civilians have been displaced as both sides have continued to exchange artillery and rocket fire, despite attempts to broker an end to hostilities.

Amnesty has previously warned against the use of banned cluster bombs, after its experts found that Azerbaijan had likely used the weapons in the region. Azerbaijan has alleged use of cluster munitions by the Armenian side, but Amnesty has yet has been unable to verify these allegations. The organisation is calling on both Azerbaijan and Armenia to join the Convention on Cluster Munitions, the global treaty banning the weapons.