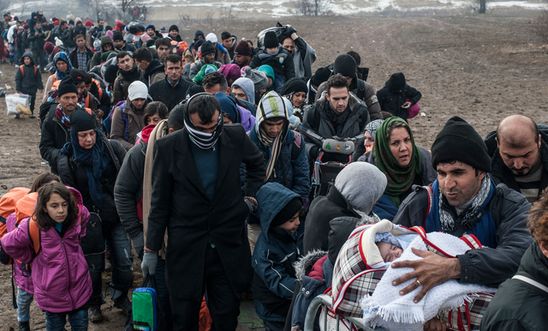 Politicians using toxic rhetoric, reminiscent of the 1930s, are creating a dangerous and divided world, said Amnesty International as it launched its annual assessment of human rights around the world today (22 February).

The Annual Report, The State of the World’s Human Rights, warns that an ‘us v them’ narrative of blame, hate and fear is undermining the very foundations of universal human rights and leaving the global response to mass atrocities and the refugee crisis perilously weak.

“When language around ‘taking our country back’ and ‘making America great again’ is coupled with proposals to treat EU migrants like bargaining chips or to ban refugees on the grounds of religion, it fosters deep hatred and mistrust and sends a strong message that some people are entitled to human rights and others aren’t.

“This toxic rhetoric being used by politicians around the world risks taking us into a dark age of human rights and could lead to profound consequences for all of us.

“Have we forgotten that human rights protections were created after the mass atrocities of the Second World War as a way of making sure that ‘never again’ actually meant ‘never again’?”

The report, which delivers the most comprehensive analysis of the state of human rights around the world, covering 159 countries, shows how divisive fear-mongering is having an increasingly pervasive impact in our societies.

Governments have turned on refugees and migrants: often an easy target for scapegoating. The Annual Report documents how 36 countries violated international law by sending refugees back to a country where their rights were at risk.

“We are witnessing the worst refugee crisis since the Second World War and wealthy nations like the UK and the US have shown an appalling lack of leadership and responsibility,” said Kate Allen. “History will judge us for this.”

In the UK, where Nigel Farage infamously unveiled a poster which showed a queue of refugees and migrants with the slogan ’Breaking Point: The EU has failed us all’, the Government has shirked its responsibility for the global refugee crisis, pushing thousands of vulnerable people into the hands of people smugglers. And its decision to prematurely close the ‘Dubs Amendment’ scheme to bring unaccompanied refugee children already in Europe to the UK is shameful.

There was a 57% spike in reporting of hate crimes in the week immediately following the EU referendum in June.

World turning its back on mass atrocities

“In December, Boris Johnson talked about how Britain ‘can do good for the world…in the projection of our values and our priorities’. But these values have to be questioned when the UK Government continues to supply arms to Saudi Arabia, whose coalition forces are bombing hospitals and schools in Yemen, violating international human rights and humanitarian law and possibly committing war crimes.

“And the UK Government threatening to scrap the Human Rights Act has potentially dangerous consequences worldwide with leaders of repressive regimes increasingly emboldened to scrap established human rights protections themselves.”

“A new world order where human rights are portrayed as a barrier to national interests makes the ability to tackle mass atrocities dangerously low, leaving the door open to abuses reminiscent of the darkest times of humanity.

“The international community has already responded with deafening silence after countless atrocities in 2016; a live stream of horror from Aleppo, thousands of people killed by the police in the Philippines’ ‘war on drugs’, use of chemical weapons and hundreds of villages burned in Darfur. The big question in 2017 will be how far the world lets atrocities go before doing something about them.”

Who is going to stand up for human rights?

Amnesty’s Annual Report documents people killed for peacefully standing up for human rights in 22 countries in 2016. The organisation is calling for mass-mobilisation against cynical efforts to roll back long-established human rights.

“Never has the fight for human rights been more urgent and more necessary. It’s inspiring to see so many people around the world taking up the fight; whether it’s protesting on the streets or showing the compassion that their leaders are severely lacking. History has taught us that we cannot remain silent in the face of such ugly demonisation, we must stand strong together to demand a world where human dignity and equality for all are respected.”

Amnesty International has documented grave violations of human rights in 2016 in 159 countries. Examples of the rise and impact of poisonous rhetoric, national crackdowns on activism and freedom of expression highlighted by Amnesty in its Annual Report include, but are by no means limited, to:

Bangladesh: Instead of providing protection for or investigating the killings of activists, reporters and bloggers, the authorities have pursued trials against media workers and the opposition for, among other things, Facebook posts.

Burma: Tens of thousands of Rohingya people -  who remain deprived of a nationality – have been displaced by “clearance operations” amid reports of unlawful killings, indiscriminate firing on civilians, rape and arbitrary arrests. Meanwhile, state media have published opinion articles containing alarmingly dehumanising language.

China: An ongoing crackdown against lawyers and activists continued, including incommunicado detention, televised confessions and harassments of family members.

DRC: Pro-democracy activists were subjected to arbitrary arrests and, in some cases, prolonged incommunicado detention.

Ethiopia: A government increasingly intolerant of dissenting voices used anti-terror laws and a state of emergency to crack down on journalists, human rights activists, the political opposition and, in particular, protesters who have been met with excessive and lethal force.

France: Heavy-handed security measures under a prolonged state of emergency have included thousands of house searches, as well as travel bans and detentions.

Hungary: Government rhetoric has championed a divisive brand of identity politics and a dark vision of “Fortress Europe”, which translated into a policy of systematic crackdown on refugee and migrants’ rights.

India: The authorities have used repressive laws to curb freedom of expression and silence critics. Human rights activists and organisations continued to face harassment and intimidation.

Iran: There has been heavy suppression of freedom of expression, association, peaceful assembly and religious beliefs. Peaceful critics have been jailed after grossly unfair trials before Revolutionary Courts, including journalists, lawyers, bloggers, students, women’s rights activists, filmmakers and even musicians.

Philippines: A wave of extrajudicial executions have taken place after President Duterte threatened to kill tens of thousands of people suspected of being involved in the drug trade.

Russia: The government tightened its noose around national NGOs, with increasing propaganda labelling critics as “undesirable” or “foreign agents”, and carried out the first prosecution of NGOs under a “foreign agents” law. Meanwhile, dozens of independent NGOs receiving foreign funding were added to a list of “foreign agents”. Russia also displayed a complete disregard for international humanitarian law in Syria.

Saudi Arabia: Critics and human rights activists have been detained and jailed on vaguely-worded charges such as “insulting the state”. Coalition forces led by Saudi Arabia committed serious violations of international law, including alleged war crimes, in Yemen.

Sudan: Evidence pointed strongly to the use of chemical weapons by government forces in Darfur. Elsewhere, suspected opponents and critics of the government subjected to arbitrary arrests and detentions. Excessive use of force by the authorities in dispersing gatherings led to numerous casualties.

Syria: Impunity for war crimes and gross human rights abuses continued, including indiscriminate attacks and direct attacks on civilians and lengthy sieges that trapped civilians. The human rights community has been almost completely crushed, with activists either imprisoned, tortured, disappeared, or forced to flee the country.

Thailand: Emergency powers, defamation and sedition laws have been used to restrict freedom of expression.