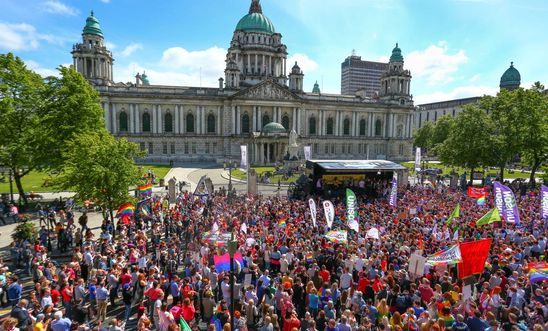 Amnesty International has welcomed the support of Hollywood film star Sir Ian McKellen for the introduction of same-sex marriage in Northern Ireland.

The actor told the BBC he welcomed the Republic of Ireland’s yes vote in a referendum last month and said it was “rather unseemly” that Northern Ireland had yet to bring in similar laws.

“I hope, as a result, Northern Ireland, part of the United Kingdom, will catch up with the rest of us now and bring in same-gender marriage because it's rather unseemly that that little bit of, corner of our country, doesn't have quite as liberal laws as the rest.”

Following the Yes vote in May’s referendum in the Republic of Ireland, Northern Ireland will be the only part of the UK or Ireland where the right to civil marriage is denied to gay couples.  On Saturday, an estimated twenty thousand people marched through Belfast calling for the introduction of equal civil marriage rights for same-sex couples in Northern Ireland. The regional Assembly has repeatedly failed to support the move over the last two years.

“Sir Ian McKellen has been a champion of equal rights for the LGBTI community for many years. His support for equal marriage in Northern Ireland is a reminder of how much we are now out of step with the rest of the UK and Ireland on civil marriage for same-sex couples.

“We hope our legislators are listening, not just to Sir Ian McKellen, but the twenty thousand people who marched in Belfast in Saturday and the majority of -people throughout Northern Ireland who want our law brought into line with the rest of the UK and Ireland.

“Amnesty International believes that states should ensure that all families are equally protected before the law.”