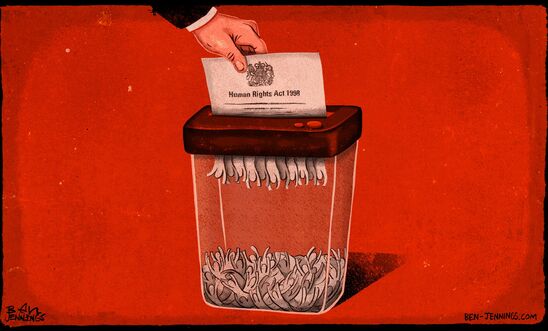 ‘From Hillsborough, to Grenfell to the appalling mishandling of the recent Covid crisis in care homes, we have never so badly needed a means to hold the Government to account’ - Kate Allen

Responding to the UK Government’s announcement today that Sir Peter Gross has been appointed to lead a review of the Human Rights Act, Amnesty warned of a ‘giant leap backwards’, Amnesty UK Director, Kate Allen said:

“Tearing up the Human Rights Act would be a giant leap backwards. It would be the single biggest reduction in rights in the history of the UK.

“From Hillsborough, to Grenfell to the appalling mishandling of the recent Covid crisis in care homes, we have never so badly needed a means to hold the Government to account and we know that the Human Rights Act does that extremely effectively.

“It took ordinary people a very long time to win these rights and we mustn’t let politicians take them away with the stroke of a pen. This looks worryingly like the latest power-grabbing move from a Government that doesn’t like limits on its powers or judges who tell them when they break the law.

“What the Government is proposing is also a gift to tyrants the world over. How can the UK call on other countries to respect human rights protections and legal responsibilities if they are busy ripping up the rule book at home?”

More than 175,000 people have called for the Human Rights Act to be kept at www.savetheact.com

Amnesty highlighted 20 of the most high-profile justice fights which involve the Human Rights Act since it came into force 20 years ago this year: