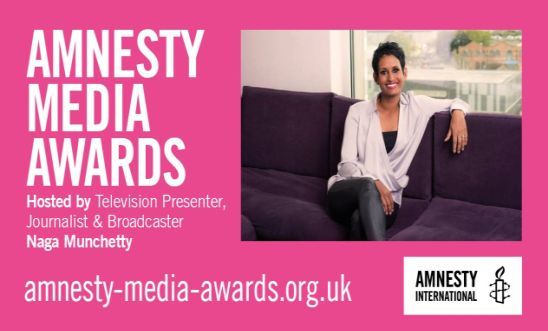 Awards will be judged by top journalists from across the UK’s national, regional and broadcast titles

Journalists, photographers and programme makers have just over two weeks to enter the Amnesty Media Awards 2020 before the closing date on Thursday 23 January.

Amnesty UK is delighted to announce television presenter, journalist & broadcaster, Naga Munchetty, as the host for this year’s Amnesty Media Awards ceremony, which will be held on Wednesday 22 April 2020 at BFI London.

This will be Amnesty UK’s 28th annual Media Awards, a prestigious set of awards that recognise the vital role journalists play and the serious risks they face in highlighting human rights abuses around the world.

For more details on categories, criteria and eligibility visit: https://amnesty-media-awards.org.uk/