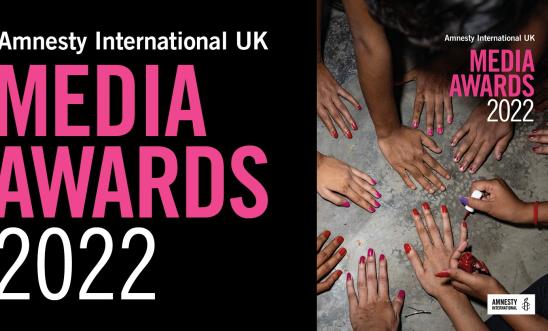 The winners of Amnesty International UK’s prestigious Media Awards 2022 have been announced this evening at a ceremony held in London, hosted by the BBC’s Special Correspondent and Filmmaker Nawal Al-Maghafi.

The awards celebrate the best human rights journalism of 2021 across 12 categories, including investigations, broadcast news, documentaries, photojournalism, student media, radio and podcasts, as well as best use of digital media.

Al Jazeera took home the award for best investigation for its exposé of state corruption and human rights abuses in Bangladesh; BBC News came top of the broadcast news category for its report on the situation for Afghan women and girls following the Taliban’s takeover; while the Guardian won ‘Best Use of Digital Media’ for its creative piece on the moment Israeli forces hit al-Jalaa tower in Gaza.

The compelling ‘Collective: Unravelling a Scandal’ came top of the documentaries category, while Patrick Strudwick won the features category for his piece in the i paper, which detailed the plight of LGBT people in Afghanistan.

Best Use of Digital Media

For images of the winners visit https://www.emilymudie.co.uk/amnestymediaawards2022