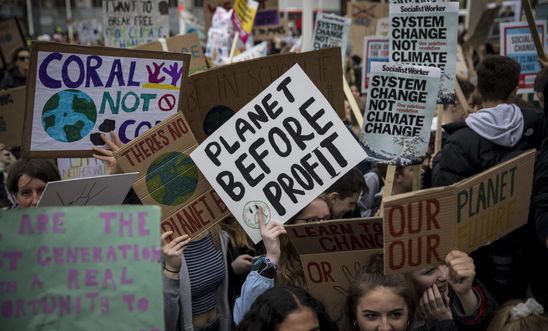 Amnesty International will divest from fossil fuel companies in acknowledgement that investment in an industry whose products are the primary source of the climate crisis is at odds with the organisation’s mission of protecting and championing human rights.

The decision to divest was taken at Amnesty’s Global Assembly, attended by delegates from around the world. The assembly also voted to take further steps to reduce the organisation’s climate impact, including by aiming to be totally carbon neutral by 2035, slash air travel by a third and move towards holding more virtual international meetings.

The decision means all of Amnesty International’s entities, which include the International Secretariat and country offices, must ensure that all assets under their sole and direct control are not invested in fossil fuel companies, and divest any existing assets from fossil fuel companies. A working group will be formed to prepare guidance on how to implement the decision.

“Fossil fuel companies know that their business model is resulting in human suffering because of its lethal contribution to climate change.

“As the world’s largest human rights organisation, we want to send a clear message that continued investment in coal, oil and natural gas companies is at odds with human rights, because of the direct link between their activities and climate disaster.

“Climate change has grave implications for human rights, threatening our rights to health, water, food, housing, and life among other civil and political rights. These risks are even graver for communities living in poverty or whose rights are already threatened or poorly protected by their governments.

“We need to remember who is responsible and accountable for the crisis humanity is facing. The primary reason we are in this mess is because governments and corporations are refusing to take the necessary steps to move away from dangerous fossil fuels and invest in developing clean technologies.”

The use of fossil fuels is the main cause of climate change, exacerbating natural disasters and environmental degradation that in turn causes massive loss of life, destruction of communities and economies.

Amnesty believes all corporations have a responsibility to respect human rights and to take proactive steps to make sure they do not cause or contribute to human rights abuses. Yet fossil fuel companies have so far failed to take adequate steps to shift towards human rights-consistent renewable energy, despite their considerable capacity to do so.

“Too many financial institutions treat fossil fuel companies as an acceptable mainstream investment. It is time for all of us to question whether they should instead be seen as a deadly gamble that jeopardies all of our futures.

“While this is a vote against investing in fossil fuel companies, this is also a vote for moving towards human rights-consistent renewable energy and technologies. The divestment movement has been a powerful force in showing the world that all of us can make the choice to invest in the solutions to the climate crisis.”

Amnesty joins major insurers, faith groups, sovereign wealth funds and universities in choosing to divest from fossil fuel companies. Since it was first launched as a call for climate action by students in 2011, more than 1,110 investors with $9.94 trillion in assets have committed to divest.

The decision also underlines the organisation’s intention to target companies as part of its global work on corporate accountability, in order to promote a shift away from fossil fuels and towards human rights consistent renewable energy.

“Amnesty International has a well-recognised expertise and track record in exposing severe human rights abuses by corporations, campaigning to prevent such abuses and ensuring accountability for survivors. We hope to build on this work, and this decision underscores our intention to scrutinise fossil fuel companies for their human rights impacts as part of our strategy on climate change and environmental degradation.”