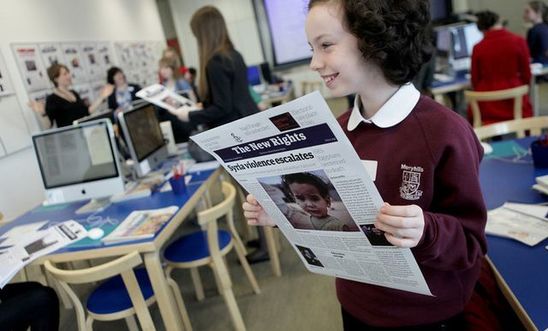 Amnesty International today (29 April) honoured some of the most talented young people in the UK at its headquarters in Shoreditch, east London at its prestigious Amnesty Youth Awards ceremony.

Pupils aged seven to 19 years old who have creatively interpreted a human rights topic through reporting, photography, song-writing, performing, fundraising and campaigning were celebrated, receiving Awards and performing their work.

Seventeen awards were made to winners at the ceremony which was hosted by BBC Radio 1Xtra’s Nick Bright.

Winners included a group from Larbert High School from Stenhousemuir, Scotland, a 17-year-old girl from Camden School for Girls in North London, an Amnesty group from Chiltern Edge School, Oxfordshire, and a 12 year old pupil from Haringey, North London.

The 200-strong audience were also treated to live musical performances by the singer-songwriter finalists, including winners of the Upper Primary and Lower Secondary category Patcham High School for its ‘Patcham Rights Respecting Song’.   The winning entries covered topics including prison sentences for young offenders, female genital mutilation, abuses committed in Guantanamo Bay detention centre and young people not in education, employment or training.

“Amnesty’s Youth Awards ceremony is a peak moment in our calendar that truly showcases Britain’s young talent.  The Youth Awards throw a spotlight on the undeterred commitment, talent and creativity of so many of Britain’s talented youth who are determined to put a stop to rights abuses.  It’s an afternoon which leaves us all feeling inspired and hopeful.”

The nationwide competition was popular, with more than 5,500 young people across the UK – from Cardiff to Selby and from Brighton to Dumfries – entering this year’s Awards.

An Amnesty group from Pate's Grammar School in Cheltenham won the award for Best New Group.  Carys Sharkey, Colm Peare, Zed von Benzon, Kate Harding, Nastasha Ion attend the ceremony on behalf of the group to receive the award. Upon winning the award, they said:  “Winning this award is a great recognition of the work of the group. It’s wonderful to bring the issues to the attention of young people who may not otherwise be aware of them.”

“I’m delighted because I worked really hard on my article and I’m proud and happy to have won.”