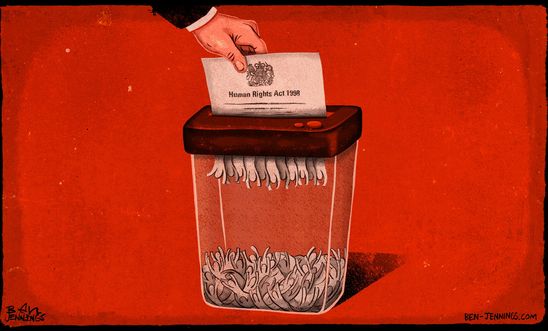 Amnesty International has warned the UK is setting a dangerous precedent to the world by undermining human rights on a number of fronts, in its annual report on the state of the world’s human rights published today (Wednesday 24 February).

The world’s leading human rights organisation warned of a global pattern whereby the institutions set up to help protect rights are being undermined by governments attempting to evade oversight of their domestic records, with the UK singled out for particular criticism given its plans to repeal the Human Rights Act.

“The UK is setting a dangerous precedent to the world on human rights.

“There’s no doubt that the downgrading of human rights by this government is a gift to dictators the world over and fatally undermines our ability to call on other countries to uphold rights and laws.

“People around the world are still fighting to get basic human rights and we should not let politicians take our hard-won rights away with the stroke of a pen.”

Amnesty’s report follows similar concerns raised about the repeal of the Human Rights Act by the UN High Commissioner for Human Rights and the UN Human Rights Committee.

Other concerns raised about the UK in the Amnesty global report include:

The report notes the UK’s continued opposition to participation in EU efforts to share responsibility for the increasing number of refugees arriving in Europe. Even with the significantly expanded Syrian resettlement scheme announced by the Prime Minister in September, the UK is receiving far fewer refugees than others in Europe. Amnesty is calling for an expansion in the rules which allow refugees to join family members in the UK, so that more relatives can be reunited with loved ones already here, as one means for the UK to better share responsibility at a time when globally the number of people forcibly displaced due to conflict and persecution has so greatly increased.

The government’s proposed Investigatory Powers Bill has faced relentless criticism, including from Amnesty and other human rights organisations, tech companies including Apple, the UN and two parliamentary committees. Concerns included the lack of adequate judicial oversight, concerns over uncontrolled data sharing with international governments, queries over the necessity and practicalities of mass surveillance (so-called ‘bulk collection’) and serious questions over the legality of the programme. Amnesty has called for a substantial redrafting of the proposed surveillance bill.

Since a Saudi Arabia-led military coalition intervened in the conflict in Yemen nearly a year ago, thousands of Yemeni civilians have been killed yet the UK government has continued to issue billions of pounds’ worth of licences for the export of arms - including combat aircraft and bombs - from the UK to Saudi Arabia.  Amnesty has repeatedly called on the UK government to suspend all sales of arms to Saudi Arabia and its coalition partners could be used to commit human rights violations in Yemen. This call has been echoed by the parliamentary International Development Committee, while a group of leading international law experts have issued a comprehensive legal opinion showing that continued UK weapons exports to Saudi Arabia are in breach of the UK’s own laws and international laws.

As well as suspending such arms sales to Saudi Arabia, the UK should support calls for a UN inquiry into the Yemen conflict.

Amnesty is warning of trend of undermining human rights from governments deliberately attacking, ignoring, underfunding, and neglecting institutions set up to protect rights.

UN failing to fulfil its role

The Syrian conflict is one example of the catastrophic human consequences of the UN’s failure to fulfil its vital role in upholding rights and international law and ensuring accountability. The incoming UN Secretary General, to be elected this year, must tackle governments that have wilfully thwarted UN action to prevent mass atrocities.

Examples of national attacks on human rights and the institutions which are there to protect them include: