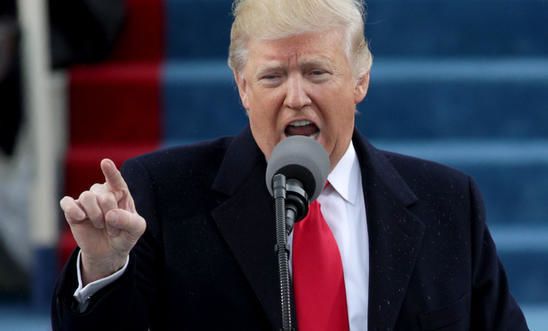 One hundred Statues of Liberty will assemble outside the US Embassy in central London on Thursday 27 April to mark US President Donald Trump’s first 100 days in office (29 April).

Amnesty has been strongly critical of several measures from the new US government - including the multi-country travel ban affecting Muslim majority countries (“discriminatory and unlawful”), the 120-day halt to its refugee resettlement programme (“malicious and divisive”), plans for a wall on the Mexican border (“a dangerous move”), and a complete halt to funding for global NGOs that provide abortion advice or referrals (“a devastating blow for women’s rights”).

Some of the Amnesty statues outside the US Embassy in Grosvenor Square (Mayfair, W1K 2HP) on 27 April will carry placards bearing the message “No ban, no wall” and “Refugees Welcome”. They will also wear black armbands.

After filing solemnly into Grosvenor Square at 11am, the 100 Statues of Liberty will form lines directly outside the US Embassy. They will stand in sombre silence to protest the human rights violations of President Trump’s administration.

This will be followed by a formal recitation of ‘The New Colossus’ poem, featuring the famous “Give me your tired, your poor / Your huddles masses” phrase. The reading will be performed by an Amnesty activist in period 19th-century dress. Following the recitation of the poem, the 100 Statues of Liberty will be seen to cover their faces in despair.

“In the space of just 100 days, President Trump has done untold damage to the USA’s already less-than-perfect reputation for upholding human rights.

“If the Statue of Liberty stands for anything, it stands for a willingness to shelter people uprooted through war and intolerance.

“It’s a crying shame that President Trump’s administration cares so little for what the Statue of Liberty represents.”

There will also be matching Statue of Liberty protests in Northern Ireland and Scotland. In Northern Ireland, there will be a Statue of Liberty stunt outside the US Consulate General in Belfast (Stranmillis Road) at 10.30am on Thursday 27 April. Meanwhile, several ‘Statues of Liberty’ will assemble outside the US Consulate in Edinburgh (93 Regent Terrace, EH7 5BW) at 11am on Saturday 29 April. In both cases, Amnesty supporters accompanying the ‘statues’ will carry placards bearing the messages “No ban, no wall” and “Refugees Welcome”.