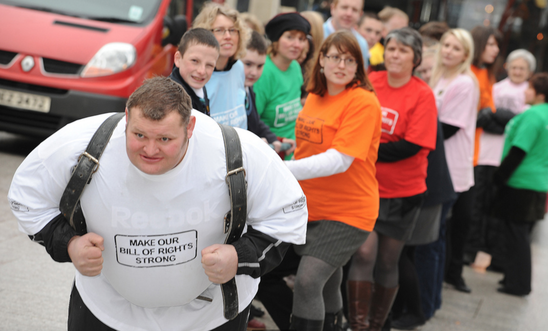 We are campaigning for a Bill of Rights that would allow people living in Northern Ireland to build on the European Convention and reflect the particular circumstances of Northern Ireland.

Such a Bill of Rights would also allow all sections of Northern Ireland's divided society to be assured that government will respect the rights of all citizens, irrespective of religious affiliation or political opinion.

In March 2010, We made our submission on the UK Government's hopelessly inadequate proposals for a Bill of Rights for Northern Ireland.

We made it clear that the proposals fell far short of international standards, and we urged the Government to undertake a complete reassessment of its approach and to issue new proposals. Over 30,000 people in Northern Ireland responded to the government consultation echoing our view - the largest response to any government consultation in Northern Ireland in recent times. Read our full submission below.

Since then, regrettably, successive UK Governments have failed to take action to bring forward new such proposals. We continue to campaign, alongside many other groups, to secure this legacy of the Belfast/Good Friday Agreement.

We are a founder and leading member of the Human Rights Consortium, which campaigns for a strong and inclusive Bill of Rights for Northern Ireland.

The Human Rights Consortium is made up of over 150 non-governmental organisations, trade unions, charities and community groups, from right across the community. Read the latest on our coalition campaign at www.billofrightsni.org