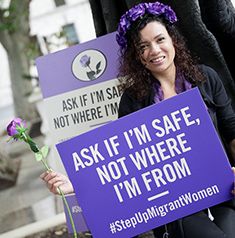 No woman should be refused help because of her immigration status.

It doesn’t have to be this way.

Join us and call on the Home Secretary to make sure domestic abuse laws don't discriminate against migrant women.

The government’s proposed domestic abuse laws are not fit for purpose.

It was supposed to ‘transform our approach to domestic abuse’, but in reality it leaves some of the most marginalised women behind.

Migrant women are often already isolated in society. They can face language barriers, racial discrimination and many are on low-income jobs.

Abusers know this. They use immigration enforcement to pressure and control their partners. 92% of migrant women report being threatened with deportation by their abuser.

If they face abuse and violence from a partner or other family members migrant women struggle to get the help they need to be safe.

Isabela was left in a desperate situation because of a lack of protections for migrant women.

“I was convinced by my British ex-husband that I had a spousal visa – but he refused to apply for one as soon as I arrived to the UK.

"I continued to undergo domestic violence from my then husband who threatened me repeatedly with deportation.

"He and his mother hid my passport away from me and told me I would never be believed and that he would take our children away from me.

"I was refused support from the police and was made homeless and destitute.

"I was also told I had no custody over my child because I was undocumented.”

Together let's make sure all women get the help they need.

This campaign for migrant survivors is led by the Step Up Migrant Women coalition of over 40 organisations, of which Amnesty is just one member. At the heart of this coalition is the specialist service providers that support the migrant survivors of domestic abuse that we are campaigning for.