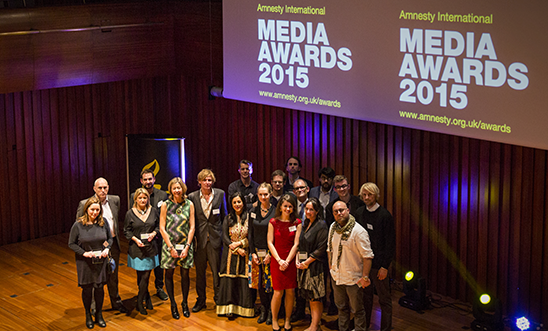 Journalists have always played a vital part in uncovering abuses and corruption around the world.

That’s why we honour and recognise the courageous work they do, and the serious risks they take with our annual Media Awards.

Our winners are often at the forefront of breaking news and exposing human rights abuses around the world and have included journalists from Channel 4 News, GQ, The Sunday Times, The Herald and ITV News.

We're looking for entries from a diverse range of media outlets in the following categories:

Each year, the UK’s finest editors, correspondents, photojournalists and documentary makers from every genre dedicate time and their professional expertise to judge the entries - this year is no exception. Confirmed judges for the 2016 Media Awards include:

The Counted (The Guardian)

I’m afraid of the sea but I’ll do anything to get out (Christina Lamb, Sunday Times)

A Woman Alone with the IRA (Spotlight, BBC Northern Ireland)

Jonathan Lawrence, Child prostitution in Zarqa: a city paralysed by the mafia