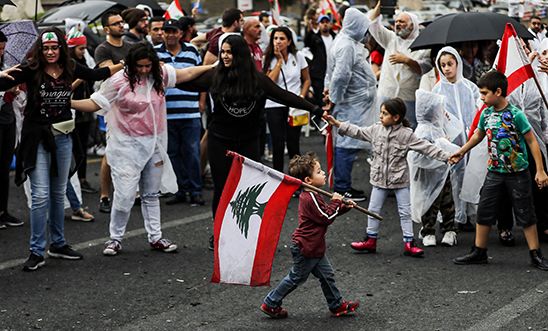 A young boy walks with a Lebanese flag past protesters, some wearing ponchos, gathering during a demonstration on the eighth day of protest against tax increases and official corruption, in Zouk Mosbeh, north of the capital Beirut, on October 24, 2019. © Joseph Eid/AFP

Mass protests swept across Lebanon shortly after the government announced new tax measures on 17 October. In unprecedented scenes tens of thousands of peaceful protesters from different religious and class sectors of society assembled in cities across the country accusing the political leadership of corruption and calling for social and economic reforms.

Underlying frustration with the government and the political elite had been accumulating for years. Public anger has escalated in recent years over electricity and water shortages, as well as the government’s failure to manage the country's waste and economic crises.

What do the protesters want?

Some of the key demands of protesters based on chants made during demonstrations and analysis by the Issam Fares Institute for Public Policy and International Affairs at the American University of Beirut include:

'They began to beat protesters with sticks and push us, they tried to beat me… There were security forces there, but they stood on the sidelines'
Fatima, a teacher from Nabatiyeh

Amnesty International has documented how on a number of occasions Lebanese security forces failed to effectively intervene to protect protesters when they came under attack by supporters of the ruling parties Hezbollah and Amal.

Days later on 29 October Lebanese security forces failed to adequately intervene when Amal and Hezbollah supporters beat and chased demonstrators and set fire to their tents at the Ring Highway in Beirut.

Members of the armed forces have a duty to ensure that the right to peaceful protest is upheld and that includes protecting peaceful demonstrators from coming under attack from rival protesters.

Activist Khaldoun Jaber was detained and violently beaten yesterday in Baabda. Lawyers are not able to contact him and not knowing where he is.

Excessive use of force

'I saw him aiming at me while I threw stones and said don’t shoot! I’ll stop throwing the stones… but he shot me four times in the stomach'
Mohammed al-Abdallah, protester shot in the stomach in Beddawi

The protests across Lebanon have been overwhelmingly peaceful and the response from army and security forces has been largely restrained. However, Amnesty International has documented incidents of excessive use of force, including in one incident, the use of live ammunition against peaceful protesters.

On 18 October in downtown Beirut, shortly after the speech of Prime Minister Hariri, security forces used excessive force to disperse protesters firing huge amounts of tear gas into crowds and chasing protesters down streets and alleys at gunpoint and beating them.

On 23 October officers from the Lebanese army and army intelligence resorted to excessive force in seeking to disperse protesters who had blocked the main Awwali highway in the southern city of Saida. Officers armed with riot shields forcibly removed protesters who sat on the ground with their arms raised as a peaceful sign, carrying them away away and handcuffing them. They also kicked and beat protesters with iron batons as well as verbally assaulting them.

In the most violent episode since the protests began, the army opened fire against dozens of protesters staging a sit-in the Beddawi area of Tripoli in north Lebanon on 26 October. Soldiers attempting to clear a road began to beat the protesters who responded by throwing stones at them. The soldiers then opened fire using live ammunition seriously wounding at least two protesters. Four people were unlawfully detained for six days by the military before being released. Their whereabouts were unknown and they were denied access to their lawyers and family, amounting to possible enforced disappearance under international law.

What Amnesty is calling for