It should be a different story 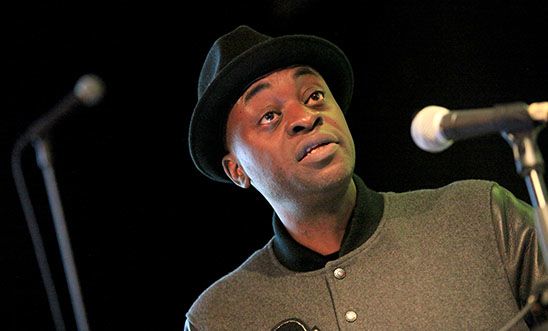 As a young boy Charlie Dark never saw himself in the books he read. Today his children feel that too. The publishing world still has a long way to go to diversify itself says the runner, poet, writer and DJ.

‘The literary world isn’t that welcoming,’ says Charlie Dark. ‘Growing up, I read a lot but never recognised myself in any of the books. Now I’ve got kids – aged 13 and 11 – and they ask me: Dad, why aren’t I in any of these books? At some point you want to read stories that mirror a reality you can identify with.

‘That doesn’t stop kids exploring their imagination or being excited by the classics. I loved The Lion, Witch and The Wardrobe, Catcher in the Rye and Jane Eyre. But representation validates who we are.’

Charlie is adept at opening up worlds that people feel are closed to them. In 2007, he founded the successful Run Dem Crew as an alternative to a traditional running club after he felt out of place among a field of club runners in a 5k race. ‘I wanted to remix running culture, to make it more for people of all backgrounds,’ he says of his now 500-strong ‘family’ with an empowering Youngers project and mentoring scheme. He says a similar approach with book clubs in schools and youth clubs would revolutionise reading. ‘I’d make these clubs about the people, the conversations and the creativity that comes out of books rather than sitting in a circle discussing interpretation. I’d want kids to feel like book clubs and aspirations to write are cool.’

The lack of diversity in children’s publishing is a major problem. How should publishers tackle it? It’s about how they look for stories, who is choosing and who they talk to, he says. ‘There’s a lot of old guard in the industry. It needs more diverse staff and authors, and influencers with a passion for books who can translate that passion to people who don’t read. Lots of new writers use the internet to get their work out because their expectations of freedom and success from a publisher are so low.’

‘I was naïve. I walked in thinking we’re all equal.’

Diversity, he believes, also means a variety of stories. ‘Not just ones set in inner-city estates or Africa. Chinua Achebe’s Things Fall Apart – we’re still reading and talking about that. Come on, there’s more stories now.’ Diversity shouldn’t be treated as niche either but part of humanity. ‘Stop pushing diverse books off to a little corner in a book shop or a library, and get more of them in schools.’

Charlie’s passionate views on literature are rooted in his own childhood. He grew up in Peckham, East London with his Ghanaian mother. Age 11, she sent him to private school where he was acutely aware of not fitting in. ‘I was naïve. I walked in thinking we’re all equal. I was one of only four black kids. I was floundering. Then a teacher saved my life. Mr Shepherd said, “I’m going to give you a weapon and a best friend – the pen and notebook”. These never leave my side. He imparted me with power of words.’