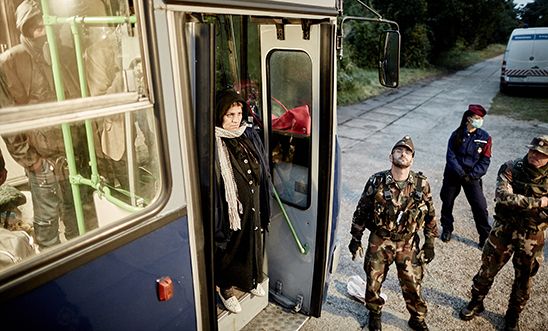 ‘When I came, I thought, Hungary is Europe, maybe it will be OK. But I realise that they hate us here’

Over the last year, the Hungarian authorities have embarked on a determined operation to keep refugees and migrants out of the country. Violent push-backs at the border, fences, dire living conditions and unlawful detention are just some of the measures taken to make it as tough as possible.

The government has spent millions of Euros on a xenophobic advertising campaign, while refugees are left to languish. The toxic rhetoric of the Prime Minister Viktor Orbán, calling asylum-seekers “poison”, has trickled down to local government, police and asylum centres.

A 15-year-old from Syria

The only way in

Hungary has erected a series of legal and physical barriers around the country to keep refugees and migrants out. The only way to enter the country legally and apply for asylum is through its ‘transit zones’ – a set of metal containers set up at the border.

Only 30 people are admitted to the transit zones each day; others languish in substandard conditions in makeshift camps at the border area, or in overcrowded centres across Serbia waiting for their turn to enter Hungary.

Anyone who crosses the border by other means is returned immediately, without any consideration of their needs for protection.

Refugees told us about excessive use of force, including beatings, kicking and being chased back with dogs. When we visited the informal camps at the Hungarian-Serbian border in August 2016, more than 600 people, the majority from Afghanistan, Syria, Iraq and Iran were staying in degrading conditions.

People living in the camps had erected makeshift tents and structures to protect themselves from heat, wind and dirt. There were no adequate and secure facilities to shower, prepare food, or for children to play safely.

Locked-up without committing a crime

Inside the transit zones, men travelling without family often find themselves detained unlawfully for up to four weeks. Asylum-seekers who pass through the transit zones successfully are taken to asylum centres where conditions are dire. We found evidence that some unaccompanied children are housed with adult men.

The detention of asylum seekers has become routine. Despite repeated requests, Amnesty International was not allowed to visit the asylum detention centres to document the conditions people were kept in.

We interviewed several former detainees in the Körmend tent camp who reported beatings and threats of violence by the police and security guards inside the detention centre. They also spoke of the frustration and trauma among the those locked up without having committed a crime.

We spoke to several asylum seekers who harmed themselves in desperation.

‘We escaped death, if you haven’t seen it with your own eyes you can’t imagine the horror. Death, fear, explosions, slaughter, that’s why we had to leave…

[My children] ask me ‘why did you bring us here, where are you taking us, what is going on?’ That is hard as a mother. We just want a normal life for our children, for them to sleep without fear. We just want safety and we want humanity.’

A Kurdish woman from Syria Refugees stand behind a fence at the Hungarian border with Serbia near the town of Horgos. Credit: AFP/Getty Images