What's Henry VIII got to do with Brexit? 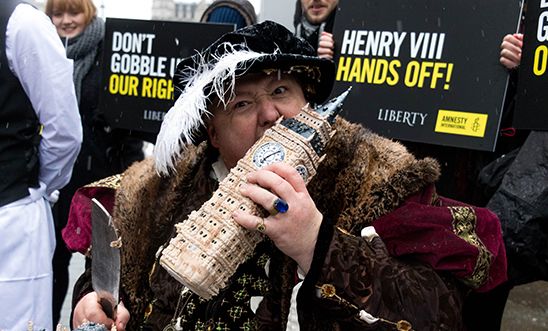 Why…is Henry VIII eating a cake in the shape of Parliament?

Good question. Because Parliament is debating the EU (Withdrawal) Bill, so we’re talking about Henry VIII clauses, the government and Brexit.

That doesn’t really answer anything… What are Henry VIII powers?

In the UK there are two types of legislation: primary and secondary.

Primary laws go through a lengthy process of scrutiny by both MPs and the House of Lords. Legislatively speaking, those are the stronger and more important kind because they get a thorough looking-over by Parliament and cannot be overturned by the Courts.

But secondary laws are different. Once written by government Ministers, they must either be accepted or rejected. Just like that. Without any opportunity to properly challenge or edit them, except by the Courts after they’re made. They are often needed, because of the sheer volume of laws that have to be made.

Secondary laws can sometimes be extra sneaky in that they can be used by the government to edit primary laws. The power to make these is given by Henry VIII clauses. They are named after the well-known king because of the Statute of Proclamations 1539, which allowed him to overrule Parliament with a swift flick of the quill.

What’s this got to do with Brexit?

A lot. So while technically primary laws can’t be edited directly, ministers can use their Henry VIII powers to write secondary laws that, in effect, amend or repeal primary ones.

The EU (Withdrawal) Bill gives them those powers to deal with existing UK laws that come from or are related to EU ones – without any sensible limits to protect human rights and equalities.

This could have a huge impact on the UK. As we leave the European Union, new laws will be written to replace EU ones and might be also written to change existing UK laws to fit the post-Brexit legal framework. That could include those laws which currently protect many of our human rights and equality standards.

The government has written into this Bill lots of Henry VIII powers, including to correct anything they consider to be ‘deficiencies’ in existing laws after Brexit – and this is the worrying part.

That’s an incredibly broad power, and there’s no restriction written in the Bill on them using these powers to roll back rights, intentionally or otherwise.

That sounds bad. What are you doing about it?

You’re right, it could be very bad. We’re really worried that the government is carving up usual parliamentary procedures, and serving up our rights on a platter to be taken apart by ministers and gobbled up.

Ministers need to know that when it comes to Brexit and human rights, they can’t have their cake and eat it.

That’s why, along with Liberty, we’re encouraging MPs to place a hard limit on these powers being used to roll back our hard-won human rights, and to ensure they’re carried over post-Brexit.

We’ve rigorously studied the EU (Withdrawal) Bill; analysing it and drafting and suggesting amendments. We’ve met with MPs and their advisors from all political parties, to urge them to support our calls. We’ve also written briefings on this and spoken at backbencher meetings.

Basically, we’re putting all our experience and skills into fighting to ensure that whatever Brexit means, it doesn’t mean losing your rights.

That sounds like a better plan. By the way, what are you going to do with all that cake?

Well, that’s a cake we can have and eat…so that’s exactly what we’re going to do...