The State of the World’s Human Rights
Amnesty International UK

A dark age for human rights in the UK 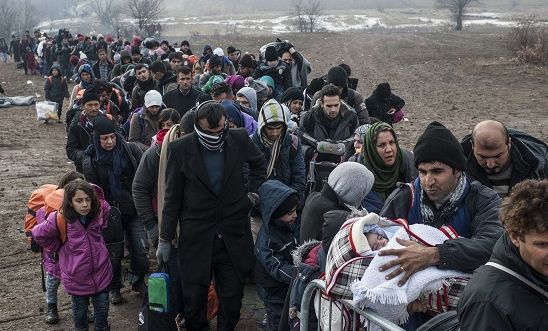 2016 saw politicians around the world using toxic rhetoric to create an ‘us v them’ climate of blame, hate and fear, undermining the very foundations of universal human rights.

The UK was no exception. It was a year when figures across the media and political spectrum used refugees and migrants as scapegoats, while the government continued to neglect its responsibility to help those fleeing war and persecution.

Download: Our report on the world's human rights in 2016 (PDF)

A shameful welcome for refugees

The world is facing the worst refugee crisis since World War II. Mass atrocities in Yemen and Syria. Famine in South Sudan. Political persecution in Iran and Eritrea. Millions of people are left with no choice but to flee their homes - or face war, torture, rape or death if they stay.

Yet the rest of the world, including the UK, has responded with deafening silence after the countless human rights abuses in 2016.

Instead of welcoming people with open arms, the UK has taken a pitiful number of refugees. The recent decision to prematurely close the ‘Dubs Amendment’ scheme to bring unaccompanied refugee children already in Europe to the UK is shameful.

Thousands could be saved from the hands of people smugglers if rich nations like the UK played a full part in solving the crisis.

We saw political language around ‘taking our country back’ and propaganda to demonise refugees, coupled with proposals to treat European nationals like bargaining chips.

This climate of hatred and mistrust sends a message that some people are entitled to human rights and some aren’t.

The consequence of this dangerous political and media narrative? A 57% spike in reported hate crimes in the week following the EU referendum in June 2016.

‘This toxic rhetoric being used by politicians around the world risks taking us into a dark age of human rights and could lead to profound consequences for all of us.’
Kate Allen, Director of Amnesty UK

The rollback of rights

The UK government has pledged to scrap the Human Rights Act – a vital safety net for the most vulnerable people to hold the state to account when things go wrong. It helps to protect freedom, safety and dignity: from women fleeing domestic violence to older people in care homes and the disabled seeking proper support.

If the UK goes ahead with scrapping the Human Rights Act it will set a very dangerous precedent to the rest of the world.

The war in Yemen has killed more than11,000 people since it started in 2015 – meanwhile the UK government is making millions of pounds from fuelling the conflict.

Saudi Arabia’s reckless and indiscriminate bombing of Yemeni homes, hospitals, schools and factories has been going on for almost two years.

We have found clear evidence of UK-made weapons being used in attacks on civilians.

By selling arms to Saudi Arabia, the UK is heavily implicated in a bombing campaign that’s killed and injured thousands of Yemeni civilians.

Join the fight for human rights

Never has the fight for human rights been more urgent.

We need courageous voices to speak out for equality, justice dignity for all. Let’s stand together to demand a world where human rights are respected.

Downloads
Annual Report 2016/17: The State of the World's Human Rights