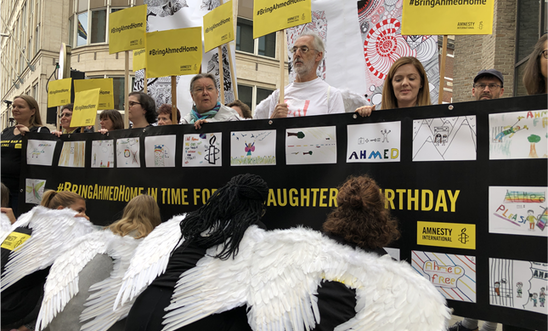 After being imprisoned and held in immigration detention in Hungary for more than four years, Syrian national Ahmed H. was finally allowed to return home to be reunited with his family in Cyprus on 28 September 2019.

“After four long years of separation Ahmed has finally been reunited with his family, just in time for his elder daughter’s tenth birthday. His return home to Cyprus is an overwhelming relief for the family, but he should never have been prosecuted, let alone convicted on those trumped up charges in the first place.”

“Ahmed’s wish to bring his Syrian family to safety was what led him to be in Hungary in 2015. It is a scandal that the Hungarian government kept him away from his wife and children for so long, but after Cyprus did the right thing, today we celebrate that they are now reunited.”

Background of the case

In August 2015 Ahmed H. left his family home in Cyprus to help his elderly parents and other family members flee the conflict in Syria. On September 2015 Ahmed was arrested under Hungary's draconian terrorism law.

Ahmed was among hundreds of refugees stranded at the Hungarian border in 2015 after police fenced off the crossing with Serbia. After a riot broke out, Ahmed was the only one charged under Hungary’s counter-terrorism law. During the criminal process in Hungary, the government repeatedly called Ahmed a terrorist, in an effort to persuade the public that refugees and migrants are threats to the country, instead of ordinary people in need of protection.

Thank you to everyone who took action for Ahmed H – it worked! After 4 years unfairly imprisoned in Hungary, he is finally home with his family in Cyprus – just in time for his daughter’s birthday in October.