Ethnic cleansing of Muslim communities in the Central African Republic 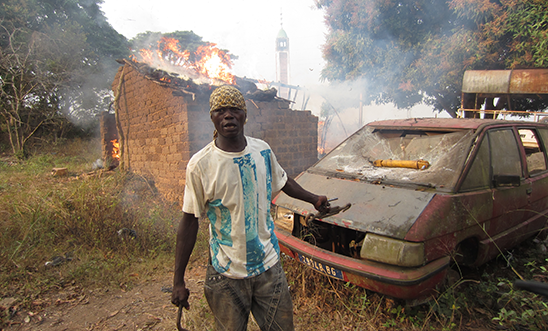 'They killed my children heartlessly, The children were slaughtered in front of our eyes, both my children and my sisters’ children.'
Oure's four sons were killed by Anti-balaka fighters in January 2014

We have recorded the ethnic cleansing of whole communities, mostly Muslims, in the western part of the Central African Republic since December 2013.

Whole villages have been left deserted as residents flee en masse in fear of their lives. Hundreds of people in the west of the country, most of them Muslim, who have not managed to escape have been killed by the militia fighters from the Anti-balaka group.

'My father could hardly walk and could not run away when the Anti-balaka attacked our village. They decapitated him in front of my eyes as he sat on a straw mat under a tree outside our hut.
'Twelve other members of my family were also massacred in the same attack. The youngest was a baby girl who was just six months old.'
Dairu Soba survived an attack by the Anti-balaka in January

One particularly deadly attack by the Anti-balaka was their mass killing of over 100 Muslims in Bossemptele on 18 January. Among the dead were women and old men, including an imam in his 70s.

Why we're documenting the abuses Our researchers have been collecting evidence, documenting atrocities and compiling testimonies from witnesses since December 2013. Documenting human rights abuses is at the heart of our work. By collecting evidence of atrocities in the Central African Republic, we can present the evidence to prosecutors at national and international level, so that those who are found guilty of human rights abuses may face justice.

Our research on the ethnic cleansing of Muslim communities in the east of the country during January 2014 is collected in the report Ethnic Cleansing and Sectarian Killings.

Militia groups behind the violence

The Anti-balaka (‘anti-machete’) is a largely Christian group. It started out a few years ago as vigilantes protecting their neighbourhoods from armed groups and bandits, and has since grown into an armed, organised group with clear lines of command. It launched its first coordinated attack on multiple locations on the capital city, Bangui, in December 2013.

The Seleka (‘alliance’) fighters are mainly Muslim. The group appeared in 2012 and staged a coup to oust the Anti-balaka President from his post in 2013. They ruled the country from April until September 2013.

So far, 290,000 people have fled the Central African Republic to seek refuge in neighbouring countries, including the Democratic Republic of Congo, Chad, Cameroon and South Sudan.

Inside the Central African Republic, 700,000 people are displaced from their homes after fleeing their communities.

6 million people - over half of the county's population - need humanitarian help right now.

Our campaign for UN peacekeeping presence

We have been calling for the UN to send peacekeepers to the country since the violent conflict escalated in December 2013. It's the most direct way to protect civilians, stop people being forced to flee their homes and to end the bloodshed.

In December 2013 the UN Security Council authorised the deployment of 7,100 peacekeepers to the country made up of forces from the African Union and France. However these troops have been unable to protect civilians.

Thank you to the more than 17,000 of you who signed our petition to the UN supporting our calls in early 2014 - they have heard your calls.

The following month, the UN Security Council voted to send 12,000 peacekeepers to the Central African Republic. This is welcome news, but more must be done to ensure an end to the violence and make sure aid gets through.

Background: Country in conflict since 2012

The crisis in the Central African Republic began in December 2012 when mostly Muslim Seleka forces launched an armed offensive that culminated in their seizure of power in March 2013.

They were in power for nearly 10 months and during that time the Seleka were responsible for massacres, extra-judicial executions, rape, torture, and looting, as well as burning and destruction of Christian villages on a massive scale.

As the Seleka withdrew, the peacekeepers allowed the Anti-balaka militias to take control of town after town. This resulted in predictable violence aimed at Muslim communities.

But as the Seleka lost their power they continued to carry out vicious attacks on Christians. Armed members of Muslim communities, acting independently or alongside Seleka forces, have also carried out brutal and large scale sectarian attacks against Christians.