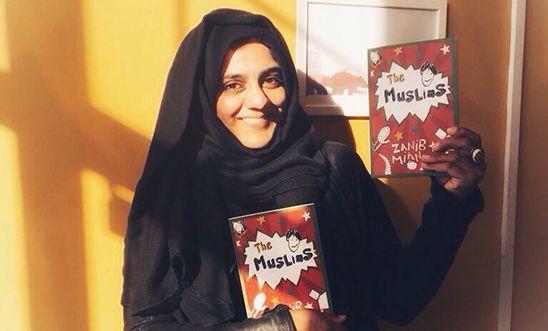 Zanib Mian, author of The Muslims

‘Picture books are not just for putting tiny children to sleep peacefully, they are for waking them up as well.’
Viviane Schwarz, Little Rebels Award winner, 2016

The Little Rebels Award for Radical Children’s Fiction has just opened its doors for 2018 submissions. Now in its 7th year, this unique prize celebrates books with genuine child appeal which also highlight social justice issues. It is an award which believes that no idea is too big nor too challenging for children; it encourages children to ask questions, and it acknowledges children’s deep sense of what is fair (and what isn’t!). It is an award which believes, very simply, that we can aspire to a fairer, more peaceful world… and that excellent storytelling can play a critical part in this.

Fiction can empower children to explore complex, weighty subjects in a comfortable space which they can control. They can put a book down at any time, they can read at a pace which suits them, their imaginations can wander, meander and explore. The media projects images of conflict and struggle into sitting rooms, onto billboards and across social media feeds and it is impossible to immunise children against this. But by filtering these same events through stories, children are at least offered a pause, an opportunity to reflect, to be ‘still’ with these world traumas and to begin to process what they might mean.

Since 2013, the Little Rebels Award has been bringing children big ideas through beautiful artwork and compelling fiction. Gender equality, mental health, and environmental concerns have been recurrent themes in previous shortlists. Shortlisted titles from Ada Twist and Rosie Revere to Made by Raffi, Hans and Matilda and Clive is a Nurse all smash stereotypes and challenge gender norms. Titles like Grandma and Girl with a White Dog portray people living with dementia with great dignity and humanity, while Stay Where You Are explores the impact of post-traumatic stress disorder. And the connection between animal cruelty and human suffering has also been at the heart of several shortlisted titles, most notably in the fiction of four-time shortlisted Gill Lewis.

Stories and a multitude of human rights

The Little Rebels Award has always taken special note of stories which engage children directly with specific human rights, sometimes in unusual and surprising ways. The 2016 winner I Am Henry Finch, for example, is an evocative, witty and philosophically nuanced account of the right to think, and to have an opinion. The right to live free from slavery is introduced through the pacey, fictionalised biography of civil rights hero, Harriet Tubman (Real Lives: Harriet Tubman). And Uncle Gobb is a light-hearted but insightful tool for exploring the right to an education.

Perhaps the human rights concern that has most dominated in all of the books submitted to the prize is the right to go to another country to seek protection. Reflecting a growing social awareness of the rights of refugees globally, a great many UK authors have translated harrowing media images into meaningful and considered texts for children. This subject was explored by both the first and second winning titles, Azzi in Between (2013), and After Tomorrow (2014), and in subsequent short-listed books such as Nadine Dreams of Home, Sweet Pizza, Tender Earth, and Welcome to Nowhere.

With 2018 winner, The Muslims, we were treated to a powerful expression of the right to one’s religious beliefs, as well as a narrative which explodes with humour, sassiness and all round child appeal. The book has since been nominated for the prestigious Carnegie Medal and the author has secured a 3 book deal with Hachette Children’s Books. This success is exactly what this award was made for: promoting books for children which have a social conscience and demonstrating a hungry market for them.

The Little Rebels Award respects children’s intelligence and perspectives. So many of the highlighted titles place young people centre stage, finding their voices, picking up banners, and calling the adults in their worlds to account. Little Rebel authors portray young people as the bearers of social change. And in a world in which young people are increasingly found spearheading mass movements for social justice, the award couldn’t be more timely.