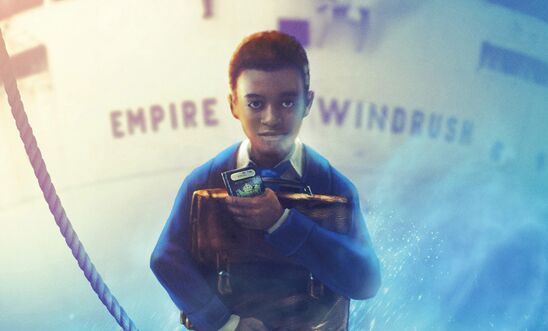 Endorsed by Amnesty, Windrush Child is an essential read for young readers and adults alike. The book teaches about inclusivity and diversity and gives voice to a generation of Children whose stories had often been overlooked. In Windrush Child, Benjamin Zephaniah brings to life an important moment in modern British history, giving voice to the Windrush generation, contextualising the Windrush Scandal, and tracing the terrible impact of the scandal right up to the present day.

Our story starts in Maroon Town, Jamaica where our narrator Leonard tells us the story of his childhood – growing up surrounded by colour, sunshine, and love. With his grandma and ‘Brother Brook’ as his guide, he learns about the history of Jamaica. One day, Leonard’s life is turned upside down when his Mother announces that they are to leave his beloved Grandma and the world where he has grown up, to go join his Father who has been working for many years in Britain.

After an epic journey across the sea, Leonard and his mother arrive in a strange and cold Southampton. From here, they make their way to the even colder Manchester. Here Leonard is faced with the challenge of getting to know a father he does not remember, managing homesickness for his Grandma and Jamaica, and fitting in and making friends in a new school where the children laugh at him and call him names.

We see Leonard come to terms with his new life, growing from a child to a man. Leonard blossoms through the tale; inspired by the words of his Grandma to always be a Lion, he grows up to be a good and honest man. We see him fall in love, make friends, grow to love Britain as much as he loved Jamaica; and see him come to define what being British means to him. The story follows Leonard all the way up to 2018 and his 70th year and the heart-breaking conclusion. Leonard decides to visit Jamaica with his Daughter. In order to do so he needs to get a passport for the first time. When he attempts to do this, he is denied citizenship by the British Government, despite the fact he has lived in Britain for over sixty years. Leonard’s tale shows the tragic reality of the Windrush Scandal. His story, which echoes the experiences of so many of those impacted by the Windrush scandal, deserves to be heard.

A powerful book with a tale that will resonate with many

Windrush Child is at once an adventure epic, a coming-of-age tale, and a historical narrative.  It is a powerful, poignant story which I found impossible to put down. It is, without doubt, a wonderful book. Zephaniah’s storytelling craftmanship is outstanding. Weaving his tale with colour, emotion, and life, the reader is transported from the beautiful sunshine of Jamaica to the streets of 1960s Manchester. In the protagonist, Leonard, Zephaniah creates a realistic and likeable voice. As I was reading, I felt that Leonard had walked out of the page and into my room to tell me his tale. Nevertheless, Leonard’s tale is, at times hard to read. There are moments that are heart-breaking, making the reader stop and think hard about the realities Leonard faced. Zephaniah tackles complex issues in a refreshingly truthful and honest way. There is no sugar coating of the realities of racism.

For me, Leonard’s childhood remembrances had a particular resonance with my own family’s tale. When my mum was ten years old, my grandma brought her and her brothers and sisters from Punjab to Birmingham. Like Leonard’s father, my grandfather had come over to Birmingham years before – a head teacher in India, he made the decision to come to Britain in the hope of building a better life for his family. At the time, the British Government was advertising widely, encouraging people to come over to Britain in a bid to help reinvigorate the British economy. In Leonard’s tale, I heard the voice of my mum’s stories: the first few days of school in a strange and foreign land, the challenge of building a new life far away from everything you have ever known and the racism that was, and is, a daily reality for so many. Within the pages of Leonard’s narrative, the echoes of experiences faced by children past and present, as they start their new life in Britain reverberate. I wish I had read this book when I was growing up. Windrush Child has really made me think about the challenges my family faced as they arrived in Britain and its provoked discussions with my mum about her story and the stories of my grandparents.

‘We should be like lions. We should never be afraid to speak’

In Windrush Child, Zephaniah imprints upon his readers the important lesson that not all stories have happy endings, that bad things happen to good people and injustices occur even to the innocent. The book opens with the line ‘I am history. We made history’, more than anything Windrush Child emphasises to children that history is not consigned to the lofty confines of the past, it is happening all around us – we all have our part to play. The book closes with a call to action, a request for help from Leonard, empowering us as the reader to use our voices for good and to stand up and speak out when we see injustice. Yes, the issues raised in the book are hard-hitting, they make us feel angry and sad, but instead of making readers feel powerless, we are spurred to act by Leonard. His powerful assertion that, ‘We should be like lions. We should never be afraid to speak’, has stayed with me and continues to inspire me.

Windrush Child is the fifth book in the ‘Voices’ series; a series of books by some of the UK's best writers, celebrating and giving voice to the unsung stories of our past.