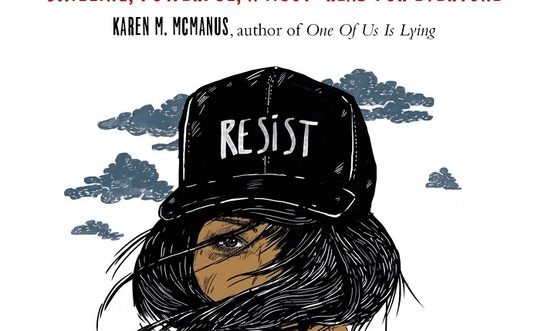 #WellLit is a space for children and young people to review new books through a human rights lens. It is a platform for them to explore connections between literature and human rights whilst upholding their right to a voice. Here you can find out what they really think about books that were written for them. Keep your eyes peeled as we will regularly upload new reviews.

What it is about

This novel seeks to explore the possibility of American hard right policies coming to fruition. It highlights how Layla, a Muslim teenage girl, suffers in an internment camp that is not dissimilar to those used by the US during WWII and under President Trump’s administration.

Throughout her internment, Layla challenges both the authorities and the older members of the interned community to fight for her freedom. The antagonist is the Director of the camp, who utilises violence and manipulation to try and halt the teenager’s progress. The most interesting aspect of the teenagers’ rebellion is their exploitation of social media in order to bring attention to their plight. This grounds the novel securely in the present and gives it a real sense of urgency. The character of Jake gives a more optimistic view of the situation, as a guard who refuses to condone/participate in the oppression. The author avoids making the relationship between the two romantic, avoiding the typical trope of much Young Adult literature. Although the ending may have carried more emotional weight if that possibility had been developed. Despite dark moments, the overarching tone is hopeful, mainly due to Layla’s actions and her friends. They are inspiring characters despite the circumstances they face.

What doesn't work so well

However, the novel assumes a fairly substantial knowledge of historic human rights abuses, which many young readers may not have, and the character of the Director becomes a gross caricature. The opportunity to examine in depth the motivations behind his deplorable actions is missed, leaving a potentially hard-hitting message about animosity towards immigrants and racism untouched.

Furthermore, the narrative starts late. This means that it is more difficult to empathise with Layla, as the reader has little knowledge of her and the contrast between her life before and her life in the camp is not as sharp as it might have been. Her relationship with her friend David also suffers a disservice from the chosen starting point of the novel - it is difficult to empathise with their relationship because there is not enough context given before Layla is removed to the internment camp. However, David’s immaturity is both infuriating and realistic, which accurately depicts the frustration of many who are unable to help those they love.

Why I liked it

Despite these inconsistencies, the novel’s overarching message is compelling and there is enough dramatic action to both engage and inform the reader without losing the sense of reality. The most effective aspect of the novel is that it never allows events to move beyond the realm of possibility; this means that there is an underlying anxiety about the state of human rights throughout the story, which acts as a wake-up call.