The Forgotten Refugees of South Asia 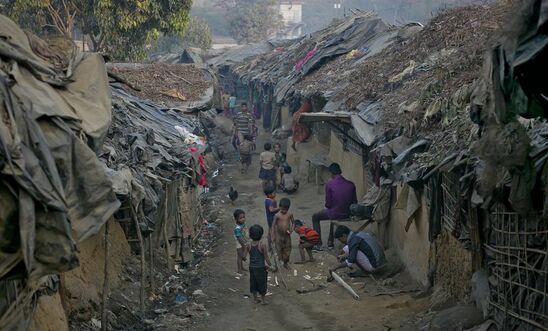 During Refugee week we should consider the millions of refugees who continue to live in very poor conditions, without hope of being able to travel to Europe. We particularly want to draw attention to the almost a million refugees in camps in Bangladesh and the four million Internally Displaced People in Afghanistan.

The people of Afghanistan have been faced with multiple phases of displacement in the past four decades. This is the reason why displacement and suffering experienced by those forced to flee their homes and communities is not a new phenomenon for the brave people of this land. Moreover, escalating conflict in Afghanistan since the start of intra-Afghan peace talks has resulted in a rise in the numbers being displaced, with thousands of new cases being registered each week. According to the UN Office for the Coordination of Humanitarian Affairs, around 327,000 people were displaced in 2020, 80% of whom were women and children. Afghanistan’s four million internally displaced (IDPs) were already dealing with social, political, economic and security problems and were living in dire conditions when the COVID-19 pandemic hit globally.

The impact of COVID-19 on Afghanistan’s internally displaced has been far greater and disastrous, they have been faced with challenges including vulnerabilities distinct from those of the general population. IDPs officially became Afghanistan’s hardest hit by the pandemic as the virus made an already dire situation for IDPs even more precarious. “Afghanistan’s four million displaced people live in conditions perfectly suited to the rapid transmission of a virus like COVID-19. The camps are cramped, unsanitary and lack even the most basic medical facilities. Despite this deadly combination, IDPS [sic] have been provided with precious little support to mitigate their situation.” “COVID-19 clearly presented an enormous challenge to the Afghan government. Though unintended, measures aimed at tackling the pandemic have had a disproportionately damaging impact on IDPs - the country’s most vulnerable group. Dedicated resources and greater support from the international community must be forthcoming to mitigate that impact to the furthest extent possible,” said Samira Hamidi, Amnesty International’s Campaigner for South Asia. [1]

An IDP man, displaced from Laghman province, who lives in Chaman-e Babrak camp located in urban Kabul talks about the impact of COVID-19 in his own words, “How could we keep social distancing if all 8 people are living in one room which is made of mud, pole and plastic sheets with a very small light and no ventilation? How could we wash our hands for 20 seconds if we can’t find water to drink and buying each bottle of 25 litres of water for 15 Afghani? How could we quarantine someone with the signs of coronavirus if we only have one room? How could we get tested if we do not have the money to travel to the hospitals where they would perform free coronavirus tests?”[2]

The Afghan government is spreading awareness through media and health professionals about social distancing, face masks, hygiene and washing hands 20 seconds to fight COVID-19. But on the other hand, such awareness is pointless for IDPs as they cannot afford to facilitate this luxury. The COVID-19 restrictions mean more than just hygiene worries for IDPs as the virus has created serious food insecurities within the camps, in addition to lack of water, sanitation and healthcare. They might survive the virus but will not survive the hunger.

2. The Refugees of Bangladesh

In 2017 nearly a million Rohingya refugees crossed into Bangladesh. Most are still living in appalling conditions in overcrowded camps. We urge the government of Bangladesh to protect, respect and fulfil the rights of these refugees, including by ensuring their participation in decisions that affect them.

Amnesty research has documented a range of ongoing human rights violations faced by Rohingya refugees in Bangladesh, including in relation to their rights to health, education, and access to information. We remain deeply concerned by the prolonged confinement of refugees on a remote silt island that is prone to regular floods and is vulnerable to frequent cyclones. In April, at least 15 refugees were killed in fires.

The Bangladesh government has failed to investigate allegations of numerous extrajudicial executions and to bring perpetrators to justice.  Amnesty has received reports of human trafficking, sexual and gender-based violence, and discrimination against women.

Amnesty International calls for concrete measures to ensure that the refugees can play a role in the decisions that affect them. Community leaders appointed by the Bangladeshi authorities are abusing COVID-19 restrictions on access to humanitarian workers and services to favour distribution to refugees who can pay more. Decision-making processes affecting the Rohingya population currently lack the necessary transparency.

Amnesty International calls on the government of Bangladesh to take urgent measures to ensure the refugees are included in decision-making on issues that will affect their lives and rights.

Recently the UK Foreign, Commonwealth & Development Office announced a 40% decrease in aid funding to the refugee campaigns in Bangladesh. This will have a severe impact on the conditions and on access to education, health care and safety.

Sign the petition to urge Bangladesh’s government to ensure the participation of Rohingya refugees in the decisions that affect them in order to protect their human rights.