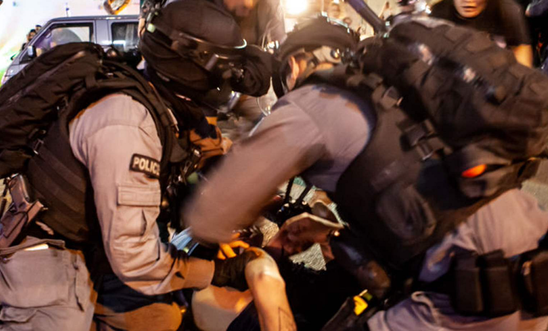 ‘Tonight we are not Jews, we are Nazis’ - Jewish supremacists circulated extremist social media messages to organise attacks on Palestinians

Israeli police committed a catalogue of violations against Palestinians in Israel and occupied East Jerusalem - including using unlawful force against peaceful protesters, sweeping mass arrests, and subjecting detainees to torture and other ill-treatment - during and after recent armed hostilities in Israel and Gaza, Amnesty International said today.

Amnesty researchers spoke to numerous witnesses and Amnesty’s Crisis Evidence Lab verified 45 videos and other forms of digital media to document more than 20 cases of Israeli police violations between 9 May and 12 June. Hundreds of Palestinians were injured in the crackdown and a 17-year-old boy was shot dead.

Amnesty’s findings show that Israeli police actions were repressive and discriminatory, with police failing to protect Palestinian citizens of Israel from premeditated attacks by groups of armed Jewish supremacists, even when plans were publicised in advance and police knew or should have known of them.

Police used unnecessary and excessive force to disperse Palestinian protests against forced evictions in East Jerusalem as well as against the Gaza offensive, while Jewish supremacists were allowed to organise demonstrations freely.

According to the Palestinian human rights group Mossawa, by 10 June Israeli police had arrested more than 2,150 people - more than 90% Palestinian citizens of Israel or residents of East Jerusalem. Most Palestinians were detained for offences such as “insulting or assaulting a police officer” or “taking part in an illegal gathering” rather than for violent attacks on people or property, according to the Follow-Up Committee for Arab Citizens of Israel.

“The evidence gathered by Amnesty International paints a damning picture of discrimination and ruthless excessive force by Israeli police against Palestinians in Israel and in occupied East Jerusalem.

“Police have an obligation to protect all people under Israel’s control, whether they are Jewish or Palestinian. Instead, the vast majority arrested in the police crackdown following the outbreak of intercommunal violence were Palestinian.

“This discriminatory crackdown was orchestrated as an act of retaliation and intimidation to crush pro-Palestinian demonstrations and silence those who speak out to condemn Israel’s institutionalised discrimination and systemic oppression of Palestinians.”

Amnesty is calling on the UN Human Rights Council’s recently-announced Commission of Inquiry to investigate the alarming pattern of violations by Israeli police.

On 12 May, 17-year-old Muhammad Mahmoud Kiwan was shot in the head near Umm el-Fahem, northern Israel, and died a week later. Eyewitnesses say he was sitting in a car near a protest when Israeli police shot him. Police dispute this, and say they are investigating.

Israeli police also used unlawful force in occupied East Jerusalem. On 18 May, police shot 15-year-old Jana Kiswani in the back as she entered her home in Sheikh Jarrah. A protest had taken place nearby a few hours earlier. Her father, Muhammad, told Amnesty that her vertebrae were shattered and that doctors do not know if she will walk again. Verified video footage shows Kiswani falling to the ground as she is shot from behind.

In another case, on 12 May Ibrahim Souri was shot in the face by Israeli police officers while using his phone on the balcony of his home to film police patrolling the street below. In a video one of the police officers is heard saying, “What is he holding?” Ibrahim Souri shouts back, “I’m filming, isn’t that permitted? Shoot, it’s all recorded.” He later told Amnesty:

“I did not imagine that they would actually shoot. I thought I had rights, and that I was safe, in a democratic country.”

Witness accounts and verified videos also confirm that during a 9 May pro-Palestinian protest in the German Colony neighbourhood of Haifa, a group of around 50 people were peacefully protesting when armed police attacked them, beating some of them.

Failure to protect from Jewish supremacists

Police also failed to protect Palestinians from organised attacks by groups of armed Jewish supremacists, whose plans were often publicised in advance.

Amnesty has verified 29 text and audio messages from open Telegram channels and WhatsApp revealing how the apps were used to recruit armed men and organise attacks on Palestinians in cities such as Haifa, Acre, Nazareth and Lod between 10 and 21 May. Messages included instructions on where and when to gather, types of weaponry to use and even clothing to wear to avoid confusing Jews of Middle Eastern heritage with Palestinian Arabs. Group members shared selfies posing with guns and messages such as “Tonight we are not Jews, we are Nazis”.

On 12 May, hundreds of Jewish supremacists gathered on the Bat Yam Promenade, central Israel, in response to messages received from the political party Jewish Power and other groups. Verified video footage shows scores of activists attacking Arab-owned businesses and encouraging attackers. One of those beaten was Said Musa who was also run over with a scooter by Jewish attackers. Only six Israelis are facing prosecution over the attack.

Politicians and government officials have also incited violence. On 11 May, riots broke out after Itamar Ben-Gvir, a Jewish Power parliamentary representative, rallied supporters to come to Lod and other towns and called for pro-Palestinian stone-throwers to be shot.

A day earlier, Musa Hassuna was shot dead by a Jewish Israeli citizen in Lod during intercommunal violence. A video shows him being shot while he was near a group of Palestinians throwing rocks. His father blamed the town’s mayor, Yair Revivo, for “calling up extremists to do this thuggery” in reference to a statement in which the mayor described events in Lod as a pogrom on Jews. Four suspects were arrested over the killing but released on bail three days later. Israel’s Minister for Public Security, Amir Ohana openly condemned the arrests, calling them “terrible”.

By contrast, the deputy leader of the Northern Islamist Movement, Kamal al-Khatib, was arrested on 14 May and charged with incitement to violence and supporting a terrorist organisation over comments in which he expressed solidarity with people in Gaza and East Jerusalem.

Amnesty has also documented torture at the Russian Compound (Moskobiya) police station in Nazareth on 12 May. An eyewitness said they saw special forces beating a group of at least eight bound detainees who had been arrested at a protest. He said:

“It was like a brutal prisoner-of-war camp. The officers were hitting the young men with broomsticks and kicking them with steel-capped boots. Four of them had to be taken away by ambulance, and one had a broken arm.”

The lawyer of Ziyad Taha, another protester who was detained at Kishon detention centre near Haifa on 14 May, said his client was tied by his wrists and ankles to a chair and deprived of sleep for nine days.