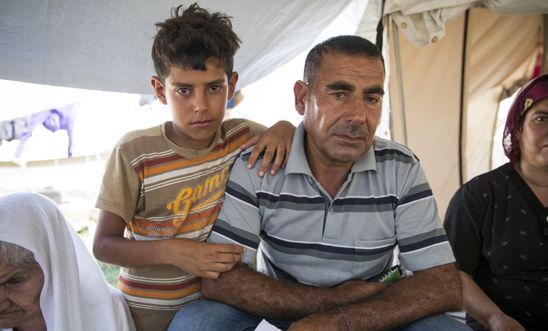 When April 2015 recorded the highest number of people drowned in the Mediterranean, the then Prime Minister David Cameron joined EU leaders in demanding that saving lives be the priority. Ever since then there has been hope that at least at sea the response to refugees and other migrants would be first and foremost humanitarian in nature.

That hope is becoming dangerously hollow.

Last year, more than 5,000 people lost their lives trying to reach Europe by crossing the Mediterranean – many of them on the journey from Libya to Italy. In Libya, an untold number were raped, tortured and enslaved.

Now, the Italian Government intends to send warships to assist the coastguard in intercepting and returning people to Libya.

It is hard to overstate just how cruel a prospect this is.

At the mercy of smugglers and slavers…. again

Libya is well-known to be a country where refugees and other migrants face a range of abuses, from indefinite detention in horrific conditions, to enslavement, rape and torture – sometimes carried out to blackmail families, keen to protect their loved ones. The authorities – or those that claim authority, including the Libyan coastguard – have been widely implicated in these atrocities.

Knowing the situation in Libya, knowing the widespread complicity in abuse and exploitation, and knowing the only escape route is smugglers and the sea, why would anyone choose to send someone back to a situation from which they must flee if they can?

It can only extend that person’s suffering while enabling the smugglers, slavers and their accomplices to profit further – including by selling the person a place in yet another boat.

Meanwhile, the Italian Government has also sought to impose a code of conduct on NGOs undertaking vital search and rescue missions in international waters – missions that save people at sea in dangerously overcrowded, decrepit and sinking boats and dinghies.

The code seeks, for example, to deter NGOs transferring rescued people from one vessel to another. Yet, such transfers can be life-saving, such as in situations where a vessel better able to continue rescuing people at sea is freed up by another better suited to transport people to port.

It is deplorable that so much energy has been invested in pressuring NGOs to sign this code. They are already subject to national and international law, make a huge contribution to saving lives, and cooperate with the authorities coordinating search and rescue responses.

Nearly 100,000 people have made the crossing from Libya to Italy this year. However, EU states have refused to share responsibility with Italy, putting the Italian Government under considerable pressure.

That refusal – to share responsibility for a shared crisis – is very much in keeping with the line of our own Prime Minister Theresa May, who has repeatedly demanded a ‘first safe country’ response to asylum-seekers – an approach designed to absolve the UK from the responsibilities thrust upon Italy and Greece in Europe, and even more so countries like Jordan, Pakistan and Uganda further afield.

April 2015 remains the deadliest month on record for refugees and other migrants attempting the crossing, with 1,222 deaths. This was during a period of several months in which there were no Government-backed search and rescue missions. The previous Italian mission had been withdrawn at the end of 2014 after other Governments – including our own – refused to support it.

The Mediterranean death toll spiralled dramatically, while the number of people attempting the journey did not fall. Holding back search and rescue is not a solution, as the early months of 2015 proved. The appalling situation in the Mediterranean shows no sign of changing, and we need to demand that EU leaders make saving lives the priority.