Beirut Explosion: The Lebanese authorities did take swift action following the blast – but in all the wrong ways and for all the wrong reasons. 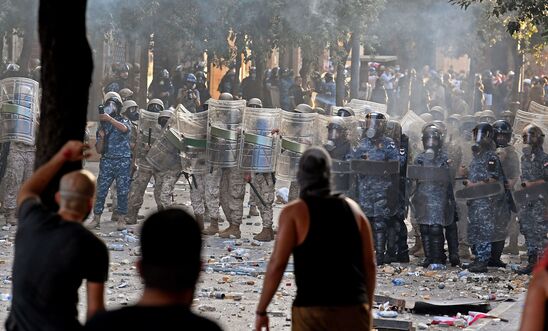 Lebanese security forces confront protesters during clashes in downtown Beirut on August 8, 2020, following a demonstration against the political leadership © AFP via Getty Images

Kareem Chehayeb is an independent journalist and Non-resident Fellow at The Tahrir Institute for Middle East Policy. He tweets at @chehayebk.

The Beirut Port explosion on 4 August that ripped through the heart of the city left thousands wounded, nearly two hundred dead, dozens missing, and hundreds of thousands homeless.  Already crippled by a devastating economic crisis, the port explosion was a knockout punch to a population suffering from soaring unemployment and food prices coupled with rampant economic inequality and the lack of any viable social and public services.

The Lebanese authorities however did take swift action following the blast – but in all the wrong ways and for all the wrong reasons.

Beirut was put into a state of emergency - subject to renewal – leaving the capital essentially under the hands of the Lebanese Army, with the rest of the security agencies at their disposal. Lebanon’s state of emergency law allows the army to stifle essential human rights, from freedom of the press, expression, and assembly, to widening the mandate that permits civilians to be tried under military courts.

Meanwhile, Lebanon’s government has taken a backseat; a resigned Cabinet leaves them at a neutral-gear caretaker capacity, while Parliament was given a one-month vacation on 17 August.

When thousands of people protested in downtown Beirut to demand accountability and justice for the victims of the blast, they were met with excessive tear gas fired at even the elderly, children, and paramedics treating the wounded. Protestors were shot at with rubber bullets, pellets, and, at times, live ammunition. Some protestors were blinded, others narrowly escaping death. At least 14 journalists and media workers were attacked during that protest, including photojournalist Rita Kabalan who was hit in the back with the butt of an M16 rifle, fracturing her collarbone.

Rather than further strangle its disgruntled population and try to control public opinion and the broader narrative, the Lebanese government ought to put its energy and resources elsewhere.

The government promised to reveal the results of an internal investigation five days following the blast; it’s been over two weeks. The investigation, with a military judge as its forensic investigator has so far put current and former port and customs officials under house arrest following interrogations, with no public information over the findings thus far. The lack of transparency over the accountability process is a significant weak point for Lebanon, which has also stalled passing a law that would guarantee an independent judiciary. To achieve  justice for the victims of this blast, Lebanon's investigation needs to be transparent, impartial, and free from any external influence - especially from its ruling class.

And rather than suppressing public dissent and resentment towards the ruling class, the authorities need to swiftly intervene in the immediate humanitarian effort. Grassroots efforts, both ad-hoc and otherwise, have taken the lead in providing shelter and immediate support for the victims of the blast, while also clearing the rubble. The army has only recently started distributing humanitarian aid, mostly food parcels, that was delivered from abroad. There is no clear government-sanctioned relief program to guarantee housing, access to food, healthcare, and other basic economic rights.

The fact that the state mobilized with urgency to quell dissent rather than to help the victims and provide an impartial and transparent accountability process is a sad reality check of where their priorities lie. Even after the Beirut blast, the ruling class is still clinging to power and resources at the expense of basic human, social, and economic rights.